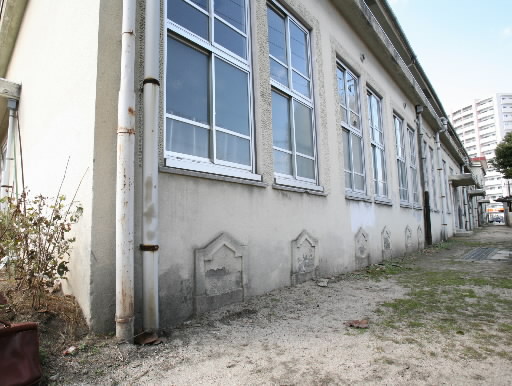 Expanded after the war and used for industrial arts

Today’s Danbara Junior High School, located in Minami Ward, was known as Hiroshima City First National School during the war. Students who completed six years at a national primary school, equivalent to the present-day elementary school, went on to the national school for two years.

The school was built in Danbarayamasaki-cho in 1932, about 600 meters north of its current location, and named Hiroshima City First Advanced Elementary School. In 1941, in line with the National School Order which enforced a military-edged education, the name was changed to The First National School.

The school was located about 2.6 kilometers from the hypocenter. The A-bomb blast destroyed the north school building, made of wood, and the window frames, and glass, in the auditorium, as well as the east and west buildings, were smashed. In the aftermath of the bombing, the east school building and the auditorium served as makeshift relief stations.

About 650 students from the school had been mobilized to work for the war effort, so very few were on the grounds that day. Around 50 of the roughly 150 students who were helping to dismantle buildings to create a fire lane in Showamachi (part of present-day Naka Ward) are believed to have died in the blast.

After the war, a second floor was added to the single story ferroconcrete east school building. Until April 2011, when Danbara Junior High School was moved to its current location, the building was long used as a space for industrial arts.