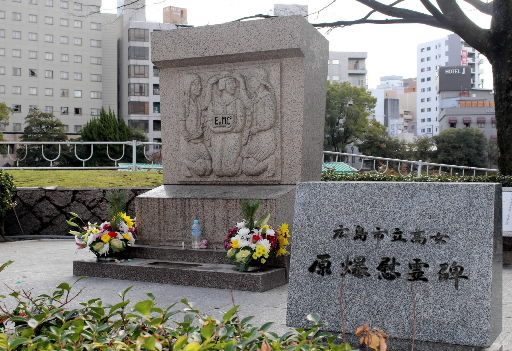 Hiroshima First Municipal Girl’s School (today’s Funairi High School in Naka Ward) is known as the school which suffered a greater death toll in the atomic bombing than any other school in the city.

On August 6, 1945, all of the 541 first- and second-year students (ages 12 or 13) and seven teachers who were helping to dismantle buildings to create a fire lane in the Kobikicho district (part of present-day Nakajimacho in Naka Ward) perished in the blast. Including the older students and other teachers who died elsewhere in the city, the school lost a total of 676 members of its community.

In 1948 a memorial was erected on the school grounds. The figures of three girls have been engraved on this monument, and the girl in the center is holding a box with the equation “E=mc2”--the formula for the theory of relativity. When the monument was constructed, Japan was still occupied by Allied Forces and so the words “atomic bomb” could not be used at the time. Because people were unable to speak freely about the damage caused by the bombing, the theory of relativity, which led to the creation of the atomic bombs, was engraved on the monument instead.

In 1957, the monument was moved to its present location at the west end of Peace Bridge, in the green belt along Peace Boulevard, near Peace Memorial Park. This was roughly the area where the students from Hiroshima First Municipal Girl’s School were carrying out their work assignment that morning, helping to create a fire lane, and were killed.