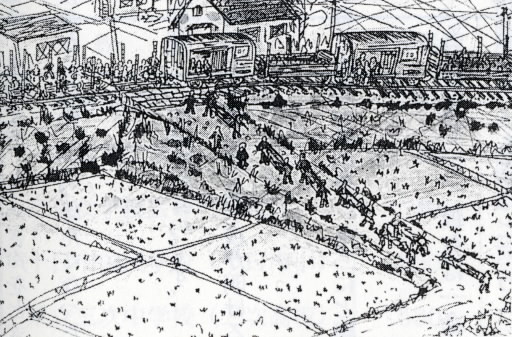 The Geibi Line runs between Hiroshima Station (in Minami Ward) and Bicchukojiro (in the city of Niimi). It links the five cities of Hiroshima, Akitakata, Miyoshi, Shobara, and Niimi, with 44 stations and 159.1 kilometers of track.

The origins of the Geibi Line can be traced back to the Taisho period (1912-1926) when the Geibi Tetsudo, a private railway, began operating between Hiroshima and Bingoshobara (the city of Shobara). In the early Showa period (1926-1989), along with the opening of a line between Bingoshobara and Bicchukojiro by the Japanese National Railway, the early Geibi Line was nationalized and officially became the Geibi Line in 1937.

In the aftermath of the atomic bombing, the Geibi Line ran a shuttle service from Yaga Station (in Higashi Ward), the station next to Hiroshima Station. According to such sources as the “Miyoshi City History” and the “Tojo Town History,” survivors of the A-bomb blast were brought by train to outlying stations in Mukaihara, Yoshidaguchi, Kotachi, Miyoshi, Shobara, Tojo, and other locations. The “Miyoshi City History” mentions the fact that, because it was well known that military and navy hospitals had been evacuated to several places in the northern part of Hiroshima Prefecture before the bombing, many victims headed for the northbound Geibi Line.