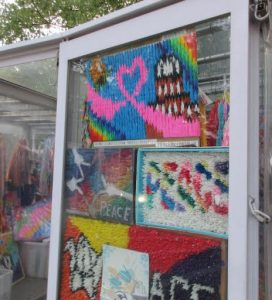 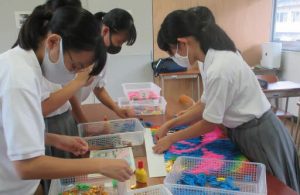 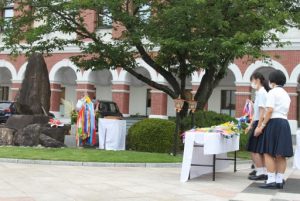 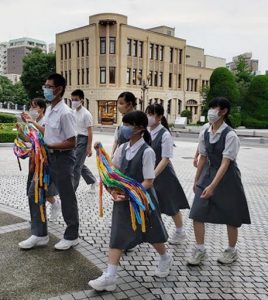 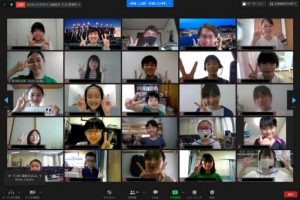 In August this year, Hiroshima and Nagasaki marked the 75th year since the two cities were devastated in the atomic bombings. Memorial events to commemorate the anniversary were scheduled at various locations, but many were cancelled to prevent further spread of the coronavirus. On the other hand, some events were carried out with special safety measures in place. As junior and senior high school students in the role of the Chugoku Shimbun’s junior writers, we herein report on some of the events in which we participated.

At Gion Higashi Junior High School (located in Hiroshima’s Asaminami Ward), 14 executive members of the student council, including myself, took the initiative on a project to create an art panel made of paper cranes. The art panel was donated to the paper crane booth standing next to the Children’s Peace Monument in the city’s Naka Ward.

In July every year, student representatives from Gion Higashi Junior High School participate in a ceremony held in front of the monument, but this year the event was cancelled. We therefore gathered together and considered what we could do instead.

The council’s executive members decided that the theme of the art panel would be “Connect.” Now, with the COVID-19 situation, it is difficult to engage in activities, but we incorporated into the panel our wishes for people to unite and overcome difficulties. Based on this theme, I drew up a sketch design for the panel. In the sketch, I connected with pink ribbon the A-bomb Dome and the Angelus bells at the church in Nagasaki.

We glued the paper cranes, which had been folded by all the students in our school, to the sketch. I believe we created a wonderful work of art by gathering every student’s wish for peace as reflected in the paper cranes. We have completed two panels, with the other panel to be offered to the Nagasaki Peace Park when we visit Nagasaki on a field trip scheduled for March of next year. (Chihiro Tawara, 13)

On August 6, my school, Yasuda Girls’ Junior and Senior High School, located in Hiroshima’s Naka Ward, held a memorial service to console the souls of 328 students, teachers, and staff at the school who perished in the atomic bombing. This year, the number of participants in the ceremony was limited to around 30 people, including student representatives and alumni, meaning that other students watched the ceremony on television screens in classrooms.

One-thousand paper cranes folded by all the students were offered to a cenotaph for A-bomb victims located on the grounds of the school. Prior to the ceremony, students described their wishes for peace within a limited word-count. Compositions selected by school grade were read out at the ceremony. I was particularly impressed by one, which read, “Now, in the 75th anniversary since the end of the war, we shouldn’t take our daily lives for granted. We must never forget the war that happened 75 years ago.”

The old school building at the time of the bombing, located 1.4 kilometers from the hypocenter, was completely destroyed. While recalling the words of one A-bomb survivor, an alumna of my school who had lost a classmate, I served as a facilitator of the ceremony. Miyu Hishina, 16, a first-year senior high school student, watched the live broadcast of the ceremony in a classroom. “Although the ceremony was scaled down due to the pandemic, it created an opportunity for us to think of the victims,” she said. “I felt the desire to share the tragedy of war from our perspective as citizens of Hiroshima.” (Yuna Okajima, 15)

Hiroshima Peace Memorial Park is located in the district of my school, Yoshijima Junior High School (located in Naka Ward). Through our peace education program, we learn about communicating the dreadfulness of nuclear weapons and the importance of peace.

In late July, our student council members offered one-thousand paper cranes folded by about 530 people at the school, including students, teachers, and school staff, to the Children’s Peace Monument that stands in the park. The project is an important activity for us to give thought to Sadako Sasaki, a girl who folded paper cranes in the hopes of recovering from the leukemia that ultimately caused her death at the age of 12.

On August 6, we shared a peace declaration our student council had written through a meeting that was broadcast in each of the classrooms. The declaration included the plea that the tragedy of 75 years ago be conveyed to following generations, and that we accept our differences, help each other, and respect everyone around us.

Our school principal, Masatoshi Nakamura, said, “While going through the peace education program, I would like you to think about the reason why wars break out, and send a message about the preciousness of peace from Hiroshima to the world.” I resolved at that time to do as much as I could to carry forward the experiences of the A-bomb survivors. (Riko Souma, 12)


Actions for future debated on internet
In youth laboratory

On August 6, the date of the Hiroshima atomic bombing, I joined the “75th A-bombing anniversary youth laboratory,” an online event in which young people communicate by exchanging their opinions with each other. Inviting two senior high school peace ambassadors in Nagasaki as guests, a total of 14 senior high school and university students in Japan discussed how to promote peace activities.

Participants shared concerns they have experienced when participating in peace activities, such as being told that nuclear weapons were necessary, or being given the cold shoulder by people around them. We concluded that Japan should make appeals about the significance of peace because it had waged war in the past, agreeing that we should continue to lobby online those with only lukewarm interest in this issue.

Another challenge is how to pass on A-bomb survivors’ experiences to following generations. Preservation of A-bombed buildings for the sake of posterity is undoubtedly important, but I found that the former Army Clothing Depot buildings (located in Minami Ward, Hiroshima)—a government proposed plan regarding which that calls for dismantling part of the buildings has become an issue of concern—are not well-known in Japan. I learned that Nagasaki also has A-bombed structures that might well be on the verge of disappearing. I hope this issue is discussed more broadly by involving citizens in both prefectures. (Airi Shono, 17)

The Peace Bell in the Hiroshima Peace Memorial Park has engraved on it a map without borders, implying that we all share the same world. I took part in a gathering organized by Hiroshima UNESCO on August 15, the anniversary of the end of the war.

About 40 people gathered at that time, including A-bomb survivors and senior high school students. A speech I made included the sentiment, “Thanks to the strong wills and actions of many people, Japan has not engaged in war over the past 75 years. As people who will create the future, we have to carry forward the hopes for peace of A-bomb survivors.”

Finally, we all observed a silent prayer together. Typically, participants take turns ringing the bell. However, to prevent the spread of COVID-19, that aspect of the gathering had been cancelled. We vowed to do what we could to realize a peaceful world free from war and poverty. (Yurina Yunoki, 16)

On August 8, I participated in an online children’s peace conference (organized by the Japanese Consumers’ Co-operative Union and others), which was held through a video-conferencing system. Children throughout Japan, ranging from elementary school students to university students, interacted with each other based on the theme “What we can do to eliminate conflict including war and use of nuclear weapons.”

I served as chair of the conference. Prior to the conference, participants looked into damage caused by war and air strikes that had taken place where they live. During the meeting, we shared our opinions including how it is necessary to listen to the A-bombing experiences of the survivors and that the terror and tragedy of war should be conveyed to younger generations. We finally put together an appeal statement consisting of three items: take interest in peace, take action, and utilize the online environment to deliver a message for peace through social media.

The children’s peace conference has been held in both Hiroshima and Nagasaki every year, but this year’s conference took place online. Despite that format, I truly felt we succeeded at contemplating peace and communicating with people around the world. (Haruka Oikawa, 17)