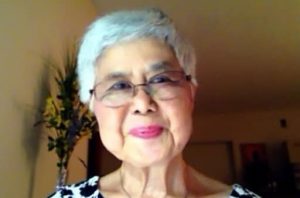 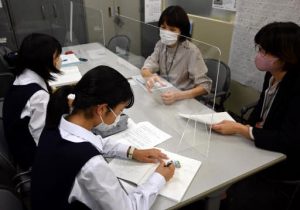 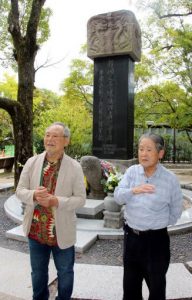 The tragedy wrought by the A-bomb crosses the borders
Not only Japanese people, but also people from abroad, experienced the atomic bombing in Hiroshima and Nagasaki. The precise number of A-bomb victims is unknown. According to Japan’s Ministry of Health, Labour and Welfare, as of the end of March, there are 2,887 A-bomb survivors who live in foreign countries such as the United States, South Korea, and Brazil and hold an Atomic Bomb Survivor’s Certificate. Among the people who came to Japan from the Korean Peninsula, a Japanese colony at the time, and experienced the atomic bombing, some A-bomb survivors returned to their country after the war, and others have continued living in Japan. The Chugoku Shimbun’s junior writers spoke with A-bomb survivors living abroad and Korean A-bomb survivors living in Japan about hardships they underwent and how they felt now.


Hiroko Nakano moved to the U.S. after the war
A-bomb survivors living in the U.S. could not talk about their anxiety surrounding the aftereffects of the exposure to the atomic bomb but shared their A-bomb experiences and organized memorial gatherings in the U.S.

In the U.S., there are 636 A-bomb survivors including Japanese descendants and those who moved there due to such reasons as marriage after the war. We spoke with Hiroko Nakano (née Yamazaki), 79, living in Los Angeles, the state of California, through a video-conference system.

Ms. Nakano experienced the atomic bombing at home in Danbaraohata-cho (now part of Minami Ward) about 1.7 kilometers from the hypocenter when she was four years old. She, her mother and her younger brother were buried underneath the rubble of a collapsed house, but they crawled out from the rubble on their own and survived. There were eight people in her family. Her brother Yoshio, who was in the fifth grade at Danbara National School (now Danbara Elementary School), died in a school building that burned to the ground.

She married a third-generation Japanese-American and moved to the U.S. in 1963. There were few doctors in the U.S. who were knowledgeable about the aftereffects of the exposure to the atomic bomb, so she could not consult a doctor even when she felt uneasy about her health. She did not tell the fact that she was an A-bomb survivor even to her friends for a long time. She said, “Some A-bomb survivors who got married in the U.S. were looked on with a prejudiced eye from their husbands’ family.”

Ms. Nakano is a director of the American Society of Hiroshima-Nagasaki A-bomb Survivors (ASA). The number of members of the society is about 100 people, including second-generation A-bomb survivors. They share their A-bomb experiences at schools and organize a memorial gathering for A-bomb victims at Koyasan Buddhist Temple in Los Angeles every August. Though the effects of COVID-19 pandemic are serious in the U.S., they wanted to continue to hold a Buddhist service and held it through a video-conference system.

Ms. Nakano said, “No matter where A-bomb survivors are, they live with emotional scars and are concerned about the effect of the A-bomb on their children or grandchildren.” Living far from Japan, A-bomb survivors confront anxiety and make appeals about the significance of peace.

Miyuri Fukuhara and Yoko Kawamoto of the Atomic Bomb Survivors Support Division of Hiroshima Prefecture told us the details of the health checkups conducted in North America. The doctors dispatched there listen to the survivors’ symptoms and give them health advice, based on the results of health checkups that they received beforehand. Officials from Hiroshima Prefecture and the city of Hiroshima provide answers to questions regarding the procedures to receive support for medical expenses by the national government and address other issues.

Last year, they visited four cities in the United States, including Los Angeles and Honolulu, as well as Vancouver, Canada, and accepted consultation from 129 people. Amid the situation marked by the aging of A-bomb survivors, the number of those who receive the health checkups has been declining year by year. Some people began to eagerly talk to Ms. Fukuhara and others about their A-bomb experiences while they were waiting for their turn to come.

The ASA, which Hiroko Nakano belongs to, helps some services including reception. Ms. Nakano said, “Doctors wear a red gown similar to a uniform of Hiroshima Toyo Carp and speak in the Hiroshima dialect. They are so friendly that we get relieved.”

Apart from North America, the doctors go to South American countries such as Brazil to conduct the health checkups. This year, their visit to South America was cancelled due to the COVID-19 pandemic. Thinking about A-bomb survivors there, Ms. Kawamoto said, “I want them to be healthy as long as possible.”


Lee Jong Guen in Hiroshima suffered dual discrimination as an A-bomb survivor and a second-generation South Korean in Japan
He had hidden his identity but he began sharing his A-bomb account in his later years
Lee Jong Guen, 92, a resident of Asaminami Ward, has hidden his identity as a second-generation South Korean in Japan and an A-bomb survivor for many years. He had suffered racial discrimination from the time when he was a child and his grief was much deepened by the atomic bombing.

Mr. Lee, who was 16 at the time, experienced the atomic bombing near Hiroshima Station on August 6, 75 years ago. He was on his way to his place of work, the second engine depot of the Hiroshima Railway Bureau. He was 2.2 kilometers from the hypocenter and suffered burns on his face and neck. When he had his co-worker applied oil for a locomotive engine to his wounds, he felt the pain that he would never forget for the rest of his life.

He returned to work before long, but it was difficult to hide the fact that he was a South Korean, so he retired from work the following year. He continued using his Japanese name and tried to forget that he was an A-bomb survivor. He joined a group of A-bomb survivors on board a Peace Boat voyage that sailed around the world in 2012, and during this trip he shared his A-bomb account on the ship. After that, he began to talk about his A-bomb experience. He said, “All human lives are equal. The differences of nationality are irrelevant.” He actively seeks to hand down his experience of the atomic bombing to younger generations.

Some people continue supporting A-bomb survivors living abroad from Hiroshima. Keizaburo Toyonaga, 84, a resident of Aki Ward and adviser to the Hiroshima branch of the Association of Citizens for the Support of South Korean Atomic Bomb Victims, is also an A-bomb survivor. When he visited South Korea in 1971, he learned there were A-bomb survivors who were suffering from poverty or aftereffects of their exposure to the atomic bomb, because neither the Japanese government nor the Korean government offered a helping hand, and that fact had great impact on him.

For about 40 years, Mr. Toyonaga was engaged in various legal battles, in which A-bomb survivors living in South Korea demanded they receive the Japanese government’s aid without discrimination, just as A-bomb survivors living in Japan. He has a message for young people. “Why did people from the Korean Peninsula experience the atomic bombing in Hiroshima or Nagasaki? I want you to think what you should do and take action so as not to have war or discrimination against other people, looking back on the history.”

You can read what the Chugoku Shimbun’s junior writers thought through the interviews on the website of the Hiroshima Peace Media Center.