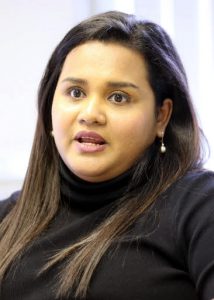 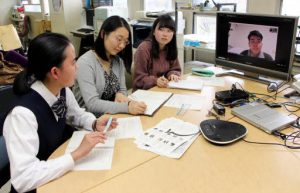 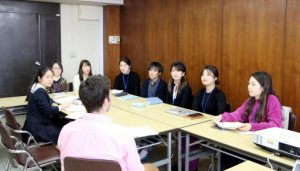 Some young people are striving to build a peaceful world without wars or nuclear weapons. As examples of activities, they express their opinions on the international stage and hold peace events. Their proactive attitudes elicit empathy and compassion and sometimes have power to change the world. The junior high school and high school students serving as Chugoku Shimbun’s junior writers report on people who engage in grassroots efforts in various locales while maintaining a connection with Hiroshima. The junior writers have learned the importance of maintaining interest in issues related to peace even after going on to school or launching careers.


Jayathma Wickramanayake, United Nations Secretary-General’s Envoy on Youth
Young people also have right to be involved in politics
Experiencing ethnic conflict, she began to act, including in policymaking

We met up with Jayathma Wickramanayake, 29, U.N. Secretary-General’s Envoy on Youth, in Japan in mid-February by invitation from Japan’s Ministry of Foreign Affairs.

Ms. Wickramanayake explained that her role as U.N. envoy was to encourage young people to join civic and political activities and provide them with support. She also advises Antonio Guterres, U.N. Secretary General, from the perspective of young people and makes appeals at international conferences about the current state of disadvantaged children suffering from conflict or poverty.

We asked Ms. Wickramanayake why young people needed to be proactive for the sake of peace. She informed us of statistical data showing that about half of the world’s population is under age 30 and about 1.8 billion people are between the ages of 10 and 24. “In more of a human rights argument, being a young person does not mean you have fewer rights than anybody else. It means you have the same human rights as anyone else. You also have a right to participate, which goes beyond participation in education and economic activities and extends to participation in social and political lives,” she explained. “For young people, it is extremely important to seek their moment in civic and political processes, volunteer in their community, engage in extra-curricular activities in schools, and participate in social media groups or even run for office, run to be mayor or part of local government.”

Her experience of having lived in the midst of ethnic conflict for 19 years in Sri Lanka, her native country, caused her to act. She thought about what she could do to live in a peaceful environment without loss of access to education. As a student, she was involved in the development of policies for the Sri Lankan government.

Ms. Wickramanayake said, “Regarding how Japanese young people and society can take leadership, I’m making sure that the story of Hiroshima and Nagasaki I heard here is emphasized, that we are able to get commitments from leaders and society at large to commit to peace and not return to war or return to the devastation that happened 75 years ago. For me, the most impressive thing I’ve discovered about Hiroshima is the resilience and leadership of Hiroshima and commitment of the hibakusha and students, especially young people, in efforts to communicate the message of peace.”

Her words resonated with us. The young people of our generation are the ones who have to live in the future. Instead of leaving the choice for building a peaceful community to the adults, we want to act based on our own opinions.

Yuta Takahashi, 19, a first-year student at Keio University’s faculty of law, once worked on activities involving the elimination of nuclear weapons and human rights issues while a member of the human rights club at Eishin Junior/Senior High School in the city of Fukuyama. Since entering university, he continues putting effort into peace activities while maintaining his connection with Hiroshima. For this interview, the junior writers in Hiroshima connected with him in Tokyo by video teleconference.

In January last year, Mr. Takahashi formed the group Kakuwaka Hiroshima, a group of young voters in Hiroshima interested in knowing about nuclear policies by meeting with lawmakers representing Hiroshima and asking about their views on nuclear weapons issues. As co-director of the group, he conveys information that can help voters make a decision when they vote in elections.

In February this year, he participated in the ICAN Paris Forum. ICAN is the acronym for the International Campaign to Abolish Nuclear Weapons, the citizens’ group that was awarded the Nobel Peace Prize. In France, he was able to exchange views with people of his generation from other nations. Looking back on his experience in France, he said, “I learned again the importance of grassroots activities.”

Mr. Takahashi decided to attend a university outside Hiroshima Prefecture, because he wanted to have the experience of viewing Hiroshima from the outside. He told us a story about when he shares his opinions on nuclear issues with friends in Tokyo, what often happens is they simply call him “passionate,” and that is the end of the conversation. What he does now is not only talk about his own views but also try to have dialogue with the other people to find common ground about their shared interests.

Mr. Takahashi encouraged us to act together. “By taking advantage of encounters with other people and maintaining connections with them, we can continue to communicate messages of peace together to the extent possible.”

In the A-bombed city of Nagasaki, university students are working on peace activities. The junior writers had an interview in February with seven members of the Nagasaki Youth Delegation 2020, when they visited Hiroshima for training.

The delegation continues to hold workshops to learn more about damage caused by the atomic bombings and about nuclear disarmament efforts. Their goal is to be involved in the Review Conference of the Parties to the Treaty on the Non-proliferation of Nuclear Weapons (NPT), scheduled to be held at the United Nations headquarters in New York City. As a delegation consisting of Nagasaki Prefecture, Nagasaki City, and Nagasaki University, the group had prepared to hold an on-site event in New York during the period of the conference.

The theme of the event was “We are all hibakusha.” The phrase indicates that anyone has the potential to be a victim of a nuclear disaster, because we now live in a world with nuclear power plants and nuclear weapons. Shiori Iwataka, 20, a second-year student at Nagasaki University, said, “As a third-generation A-bomb survivor, I want to communicate the message I have inherited from hibakusha.” Kazuki Kawamura, 22, a fourth-year student at Nagasaki University, began his interest in nuclear issues based on his experience of having lived in the United States, a nuclear superpower.

“When we think about current issues, we should look at the history as well.” We thought that impressive sentiment expressed by one of the members is important when having discussions with those who hold different opinions from us in terms of the atomic bombings.

After these interviews were conducted, the novel coronavirus had spread broadly throughout the world and it was thus determined that the NPT review conference, scheduled to begin April 27, would be postponed. The junior writers called Honoka Taniguchi, 20, a second-year student at Nagasaki Prefectural University, for her thoughts about all that. She remarked, “The postponement is disappointing, but we’ll continue our efforts by improving contents for the event, making presentations at different occasions, or by holding peace lectures at schools.” Her comment revealed her will to do the best she can in any circumstances. The comments and actions by members of the younger generation are a baton of peace that will continue to be handed down to others.