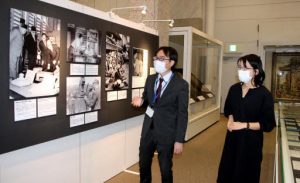 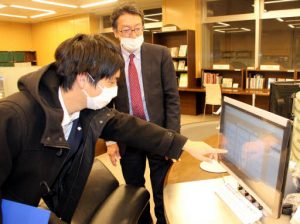 Connecting to memories of atomic bombing
In the Hiroshima Peace Memorial Park, located in Hiroshima’s Naka Ward, there are two public facilities that convey information about the damage caused by the atomic bombing and the importance of peace: The Hiroshima Peace Memorial Museum and the Hiroshima National Peace Memorial Hall for the Atomic Bomb Victims. The two facilities, normally visited by many citizens and tourists, are temporarily closed to prevent the spread of the coronavirus. The Chugoku Shimbun’s junior writers interviewed staff members who work at the facilities before the closing took place to learn about their feelings regarding their work and about the difficulties they have encountered on the job.

The memorial museum’s Curatorial Division, including eight experienced archivists, is in charge of preservation and display of materials related to the atomic bombing. Hironobu Ochiba, 43, and Yukimi Dohi, 33, both curators at the division, told us about their work and their attitudes toward the work with which they are entrusted.

Most of the donated materials are belongings of A-bomb victims that have been stored at family homes over many years. The mementos are entrusted to the museum in the hopes that they can be left to posterity. Curators listen carefully to the feelings of the bereaved families to find out and record information about the situation of the materials’ owner at that time. Ms. Dohi said, “We firmly accept the family’s decision to part with the precious materials and their wish that the tragedy is never repeated.”

An elderly man once was moved to tears in front of a tattered blouse exhibited in the museum showcase. “I wanted my sister to at least find love,” he had said. With that encounter, Ms. Dohi realized the museum is also a “place for mourning the deceased.”

One of the curators’ important jobs is the preservation of materials that, for example, show rows of streets and houses in Hiroshima before the A-bombing and the damage caused by the A-bombing. Clothing and daily necessities exposed to the bombing are fragile and easily deteriorate if stored outside. To prevent further deterioration, humidity-control materials are placed in display cases and replicas of the artifacts are created.

The layout of display rooms is also an important consideration, to ensure visitors can readily observe the exhibits. Mr. Ochiba, one of the staff members in charge of selection of materials to display when the museum’s main building reopened after renovation, shortened the descriptions placed beside each exhibit and carefully considered the best way to display the materials. He is also in charge of the Special Exhibition Commemorating the 75th Year of the Bombing, which will be held until February 23 next year. A beer bottle deformed by heat and other artifacts collected by Shogo Nagaoka, the museum’s first director, are on display, along with survey materials related to radiation dose. “The original role of the museum is to continue conveying the horror of the atomic bombing,” he emphasized.

The curators continue to organize and survey such materials even during the temporary closure. Ms. Dohi said, “We look forward to the day when crowds can once again visit the museum.”

The Hiroshima Peace Memorial Museum opened in 1955. Following recent renovations, the east building of the museum reopened in 2017 and the main building in 2019. Permanent exhibits in the main building display 539 pictures and photographs of the atomic bombing as well as 299 actual A-bombed items. The museum’s Outreach Division supports A-bomb survivors when they communicate to the public about their A-bomb experiences and also offers peace-study courses.

“Have a sense of crisis about nuclear weapons”

The Hiroshima National Peace Memorial Hall for the Atomic Bomb Victims stores memorial photographs of A-bomb victims and survivors’ memoirs. The work of Isao Hashimoto and other curators at the memorial hall varies a great deal, from collection of memorial photographs and memoirs, record-taking of survivors’ experiences, all the way to organization of special exhibits.

The memorial hall holds one special exhibit a year. The exhibit put on at present until the end of February 2021 relates to the late Goro Shikoku, an artist who devoted himself to the anti-nuclear movement. Mr. Shikoku had a younger brother, Naoto, who was exposed to the A-bombing. A 30-minute film based on a diary kept by Naoto until he died at the age of 18 is also being shown at the exhibit.

Staff members read the related documents carefully and met Mr. Shikoku’s family to write a script for the film. Mr. Hashimoto actually walked the same route that Naoto had taken to get home after the atomic bombing. He said, “We made the film taking into account the feelings of Mr. Shikoku and his younger brother as well as the thoughts of their family.”

The facility also listens to stories of A-bomb experiences directly from the survivors and transcribes them as a historical record. Mr. Hashimoto recently heard a story from a 93-year-old woman. Quoting her, he put her words together in sentences that looked as if she was speaking in front of us.

At present, about 20,000 photographs have been registered. The memorial hall fully redesigned its website this summer to further draw the public’s interest. The site calls on the public to register photographs as “proof that their family and friends once lived.”

To appeal to young people is indispensable work. The memorial hall created a hand-made workbook for elementary school students that serves as a guide for different sections of the memorial as the students move through the facility and respond to questions. “Simply raising your voice against war does not resonate with visitors,” said Mr. Hashimoto. “We use trial and error to discover what kinds of exhibits and efforts are necessary to have guests understand the current situation surrounding nuclear weapons and feel a sense of crisis about it.”