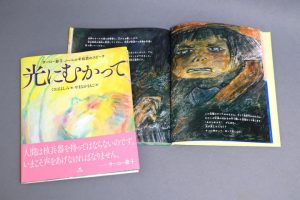 A picture book featuring Setsuko Thurlow, 90, an A-bomb survivor who lives in Canada, has been published by Chobunsha (Tokyo). The publication is based on a speech Ms. Thurlow delivered on behalf of the International Campaign to Abolish Nuclear Weapons (ICAN) at the 2017 Nobel Peace Prize awards ceremony.

The book, titled Hikari ni Mukatte (the title in English, Crawl toward the Light), was written based on the experiences of Ms. Thurlow, who experienced the atomic bombing at the age of 13 about 1.8 kilometers from the hypocenter in Hiroshima. As she was trapped underneath a collapsed building, she heard a voice in the darkness saying, “See the light? Crawl toward it.” Encouraged by those words, she finally was able to free herself. In the book, Ms. Thurlow introduces that story and her other experiences and calls on readers to support the Treaty on the Prohibition of Nuclear Weapons (TPNW).

We junior writers interviewed, online, Yoshimi Kusaba, 64, a freelance editor who was involved in the planning of the book’s publication, and Yuko Horie, 41, lead editor for the book at the publishing house Chobunsha.

The project to publish the book started with the idea of Ms. Kusaba, who wanted to convey Ms. Thurlow’s powerful English speech in easily accessible Japanese for children who will shape the next generation. The Japanese translation of the English term “accomplices” is included in a sentence emphasizing that not speaking out is the same as being an accomplice. The wording, though difficult, was left as is. Ms. Kusaba believed that using the wording in that way would make a lasting impression on readers, and as a result, encourage them to think about its significance. She says “I wanted children to consider the atomic bombing as not simply history but as their own stories, and act accordingly.”

The First Meeting of States Parties to the TPNW will soon be held in Vienna. Ms. Horie said, “Now is the time to take a renewed interest in nuclear weapons because the risk of use of such weapons has increased.”

The images appearing in the book help readers imagine Ms. Thurlow’s experiences in the atomic bombing and communicate the idea that nuclear weapons are an absolute evil. The publication contains 40 pages and is priced at 1,870 yen. (Riko Soma, a third-year junior high school student)