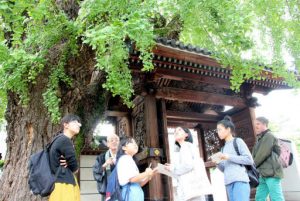 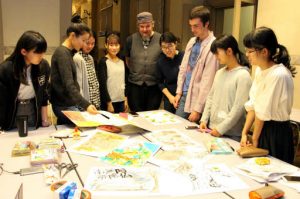 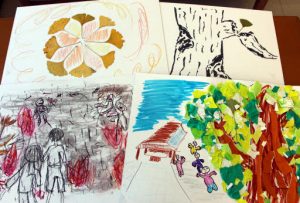 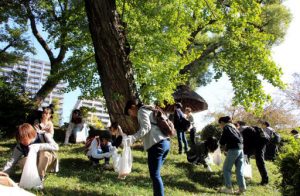 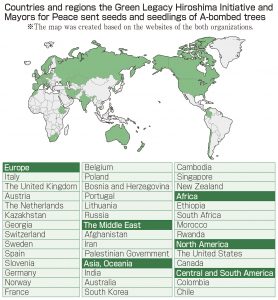 When we walk in the central part of Hiroshima, we encounter trees that survived the atomic bombing. Those trees sprouted and grew powerfully despite wounds caused by the atomic bomb’s blast and heat rays, giving hope to citizens. Junior writers of the Chugoku Shimbun went to see these A-bombed trees, conceived of a theme, and later created a picture-card story in conjunction with several American artists. We also took part in the activities of an organization that sends seeds and seedlings to various places around the world. We want people both in and out of Japan to know more about the A-bombed trees that convey the citizens’ wish for peace.


Creating a picture-card story with American artists on the theme of a ginkgo tree
The City of Hiroshima has registered as “A-bombed trees” about 160 trees that were within a roughly two-kilometer distance from the hypocenter prior to the atomic bombing. A ginkgo tree in Anrakuji Temple located in Higashi Ward is among them. It was exposed to the atomic bombing on the grounds of the temple about 2.1 kilometers from the hypocenter, and part of the trunk was burned. Today, however, it grows big with many leaves.

We visited Anrakuji Temple and listened to memories of that time from Koji Toyooka, 89, former head priest of the temple and, himself, an A-bomb survivor. His younger brother, Junji, then 12, turned black from burns covering his body and died in pain at the temple. In the year following the atomic bombing, the ginkgo tree sprouted and encouraged people around the temple.

We also took part in a peace event workshop called “ZERO Project Hiroshima,” held at the former Hiroshima branch building of the Bank of Japan in Naka Ward, and created a picture-card story, whose main character was this ginkgo tree. The event was sponsored by the organization for which Cannon Hersey, 42, an American artist, served as representative.

After creating a scenario, we drew pictures with crayons and calligraphy pens on eight sheets of drawing paper, imagining scenes of the story. We produced a plastic impression of the leaves with pieces of torn origami paper and stuck the real Gingko leaves on the drawing paper to make the tree look vivid.

We also recorded a video of the procedure complete to the end of the picture-card story, and recorded a narration with our voices. Media artist, Peter Bill, 49, made it into a 6-minute video. We also created an English version, and Mr. Hersey and others are going to show it in New York next spring. We hope our wish to realize a world without nuclear weapons will be conveyed to adults and children who are not currently interested in the atomic bombing.


New shoots appear in 36 countries and regions
The Green Legacy Hiroshima (GLH) Initiative, a citizens’ group in the City of Hiroshima, has been sending seeds gathered from the trees that survived the atomic bombing, and seedlings raised from the seeds, to schools and pacifist groups around the world. In the beginning of October, about 30 members of GLH gathered seeds from Ginkgo trees and Kurogane Holly trees that survived the atomic bombing.

A Ginkgo tree in the Shukkeien Garden in Naka Ward, 1.3 kilometers from the hypocenter, stands a tall 17 meters, though its trunk is tilted due to the blast of the A-bomb. When we pushed aside the grass surrounding the base of the tree, we saw many Gingko nuts had fallen there. We felt the tree’s ability to survive.

Kurogane Holly trees on the grounds of Hiroshima Castle were exposed to the atomic bombing at a location 910 meters from the hypocenter. The bark of the trees is uneven and black, and we know it burned at the time of the A-bombing. We crushed the tree’s red nuts and gathered the seeds from within them. The seeds were so small we actually had trouble gathering them. We heard the seeds would be stored in the Hiroshima Botanical Garden in Saeki Ward with support from a tree doctor, and would be mailed to places abroad.

GLH was established in 2012 by the Hiroshima Office of the United Nations Institute for Training and Research (UNITAR) in Naka Ward and an NGO, ANT-Hiroshima in Naka Ward. Nassrine Azimi, 60, a representative of GLH, said second-generation trees that survived the atomic bombing grew in various places and people would be able to know the background of the trees and the wish of people in Hiroshima by seeing the trees.

The seeds and seedlings have been sent to 36 countries and regions, including such nuclear weapon states as the United Kingdom and France. We thought if we continued participating in small activities like this, it would be a large driving force toward abolishing nuclear weapons.

Mayors for Peace (for which Hiroshima Mayor Kazumi Matsui serves as president) has also sent seeds and seedlings to its member municipalities since 2014. It has sent them to 110 municipalities of 31 prefectures in Japan and 54 cities of 18 countries abroad.