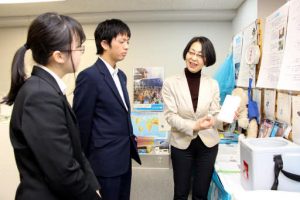 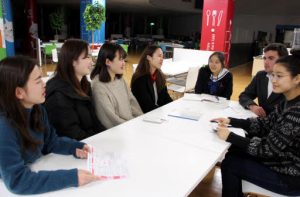 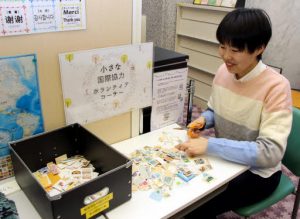 Monetary donations not only way to cooperate

According to a survey conducted by the United Nations Children’s Fund (UNICEF), in 2018 approximately 5.3 million children worldwide did not reach the age of five. They were victims of lives lived amid poverty, armed conflicts, natural disasters, and other desperate situations. In response, the Chugoku Shimbun’s junior writers spoke with international support organizations in Tokyo and the prefecture of Hiroshima about the kind of support they could provide to children globally. From this work, we learned that there were various ways to support children besides monetary donations. Some organizations, for instance, collect incorrectly addressed or unused postcards. We encourage everyone to start something similar little by little.

We asked the staff at the Hiroshima Association for UNICEF, in Naka Ward, Hiroshima, about the current situation of children in developing countries and the kind of international support young people could provide them.

The Hiroshima Association for UNICEF supports other UNICEF organizations in providing support to children living in 190 countries and regions. UNICEF in Hiroshima undertakes street fund-raising campaigns and holds visiting lectures on 10 themes, including child labor and refugee issues. Kazumi Takata, 60, secretary general of the Hiroshima Association for UNICEF, explained with photographs the plight of children. According to Ms. Takata, one in four children under five years of age suffers from malnutrition, and about 61 million children are unable to attend school.

UNICEF uses donations it has raised to provide relief supplies. Ms. Takata showed us vaccines used to prevent infectious diseases, ready-to-use nutritional therapeutic food as a peanut butter-like paste, oral rehydration salts, and other relief supplies. There were more varieties than we had imagined.

Ms. Takata had a message for young people. “I want you to know what is happening behind the world’s affluence and do whatever you can do to help people in need.”

Eishun Tanino, 19, a second-year student from the international studies department and the club leader, said there are 11 first- and second-year students in the club. The fund-raising activity, in which a meal is included in the menu every Thursday for this support system, has been carried out since 2014.

However, because few students participate, club members have been working on promoting the program by posting menus containing the special meal on Twitter and handing out flyers to inform other students. “The good point of this program is, students can continue to participate without feeling financially burdened,” said Ms. Tanino. “I hope the number of students helping us will increase.”

The university’s cafeteria is open to the public.

Use of stamps and caps that were typically discarded

The International Exchange Lounge on the first floor of the International Conference Center Hiroshima, located in Naka Ward, collects used stamps and plastic-bottle caps. We junior writers had a chance to participate in volunteer work related to the sorting of collected stamps. We first removed a large number of stamps from a stamp-collection box and carefully trimmed the edges. We enjoyed doing this work because the stamps included some from abroad that we had never seen before. The sorted stamps are sent to the Japan Overseas Christian Medical Cooperative Service (based in Tokyo) and sold to collectors. The money obtained from the sales is used for projects such as training medical staff in, and dispatching medical staff to, developing countries.

Collected plastic-bottle caps are sent to a non-government organization (NPO) in Tokyo from groups in the city of Hiroshima. The money obtained from the bottle caps is used to purchase vaccines for polio and other childhood diseases. Through the volunteer work, we learned that a little attention to daily life can lead to use of discarded things taken for granted toward providing aid to disadvantaged people.