The Key to a World Without Nuclear Weapons: Next Steps Toward Nuclear Abolition, Part 2 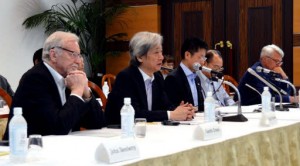 Role of nuclear weapons must be reduced, “no first use” policy embraced

Both the United States and Japan have been exercising diplomatic pressure on North Korea, which continues to pursue its nuclear and missile development programs. Amid rising tensions, the Hiroshima Round Table, a meeting that brought together experts to discuss nuclear disarmament, was organized by the Hiroshima prefectural government and held in August. The chairman’s summary of the meeting stated that “the U.S. should take the option of using nuclear weapons in a first-strike against North Korea off the table,” calling this “immoral and unwise.” It also urged Japan to adopt “the universal embrace of ‘No First Use’ nuclear doctrines.”

The meeting was attended by 16 experts from seven nations, including the United States, Japan, China, and South Korea. The statement also said that “a conventional threat” to retaliate “would be highly credible and effective given the advanced conventional superiority of the United States, Japan and South Korea.” The underlying idea of the chairman’s statement is a security framework that does not depend on nuclear weapons. Kiichi Fujiwara, an expert on international politics and a professor at the Graduate School of the University of Tokyo, presided over the meeting.

If a nuclear weapon state declares that it will use these weapons only in the event of another party launching a nuclear attack, the role of nuclear deterrence would then be limited to a response against a nuclear strike. If all the nuclear weapon states were to adopt and abide by such a policy, in theory, nuclear weapons could no longer be used. As a result, the situation would be closer, though not completely, to the goal of the Treaty on the Prohibition of Nuclear Weapons, which stipulates that nuclear arms must never be used under any circumstances.

After the visit to Hiroshima, in May 2016, by then U.S. President Barack Obama, U.S. media reported that the Obama administration was considering the adoption of a “no first use” declaration. The Japan Confederation of A- and H-Bomb Sufferers Organization welcomed this news, anticipating “half a step forward” toward the abolition of nuclear arms. The Hiroshima prefectural government sent a letter to the White House, expressing its support for such changes in U.S. nuclear policy.

This policy, however, was not adopted. Reportedly, John Kerry, who was U.S. secretary of state at the time, was against implementing this policy out of consideration for Japan and South Korea, which depend on the U.S. nuclear umbrella for their security.

At least the Japanese government has said that it does not support the idea of U.S. nuclear retaliation in response to non-nuclear attacks. At the Lower House Foreign Affairs Committee on April 25, 2014, then Foreign Minister Fumio Kishida said that the United States would contemplate using nuclear weapons only under extreme circumstances, where the vital interests of that nation or its allies had to be protected, adding that the Japanese government shared this same view.

He also said that nuclear weapons continued to serve as deterrence against attacks with conventional or biological and chemical weapons by North Korea or other countries. His remarks can be interpreted to mean that the government hoped the United States would consider carrying out a preemptive nuclear strike under “extreme circumstances” and that Japan would continue relying on the U.S. nuclear umbrella even if North Korea and other nuclear states moved to abandon their nuclear arms.

Taro Kono, a Liberal Democratic lawmaker, criticized the government’s attitude, saying that it did not support the “no first use” declaration and did nothing to lessen the central role of nuclear weapons. Three years later, Mr. Kono replaced Mr. Kishida as foreign minister this past August. But so far Mr. Kono has done nothing, either, to lessen the role of these weapons. Taking into account the issues involving North Korea, some experts say that such a move would weaken deterrence against biological and chemical weapons.

Because the “no first use” policy is only a political declaration, and is not governed by law, its credibility remains an issue. The chairman’s statement from the Hiroshima Round Table calls for building up mutual trust by making “major reductions” in “the number of weapons on high-alert launch readiness,” since both the United States and Russia are believed to each hold around 1,000 weapons that are ready for immediate launching.

Hiroshima Prefecture’s Peace Promotion Project Team commented that if the nuclear weapon states and those that depend on these weapons argue that a policy of gradual reductions in nuclear arms would be more effective than the nuclear weapons ban treaty, they should propose specific steps and implement them in order to bridge the divide between the nuclear weapon states and those nations that support the treaty. The project team has sent the chairman’s statement to the Ministry of Foreign Affairs, which has organized a meeting of the Eminent Persons Group for November 27 and 28.