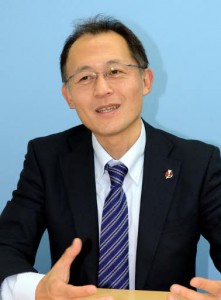 In an interview with the Chugoku Shimbun, Akira Kawasaki, a member of ICAN’s steering committee, said that the awarding of the Nobel Peace Prize to ICAN will fuel interest in the Treaty on the Prohibition of Nuclear Weapons. He expressed his determination to dramatically increase the number of signatory nations to the treaty by promoting discussion about the agreement.

What challenges will ICAN and its work face in the future?
I would like to see the number of countries signing and ratifying the nuclear weapons ban treaty increase dramatically. In September, when the treaty opened for signatures, 53 nations and regions added their names to it. This is a good start. However, we shouldn’t be satisfied with this number. To get the nuclear weapon states and those that depend on nuclear weapons involved, we have to enhance the influence of the treaty so that we can increase the number of signatory nations to nearly 150, far beyond 100. To that end, we will need to spread both the Hibakusha Appeal, a signature drive aimed at promoting the abolition of nuclear arms and the A-bomb accounts of the survivors to every corner of the world.

What would you like local governments and citizens to do?
Mayors for Peace, for which Hiroshima Mayor Kazumi Matsui serves as president, adopted an appeal this past summer for all its member cities to put pressure on their national governments to participate in the nuclear weapons ban treaty. I hope that the municipal assembly of each member city will discuss the treaty and that citizens will become more actively involved in discussing the treaty issue. I also hope that the nuclear weapons ban treaty will become a focal point in the current Lower House election campaign.