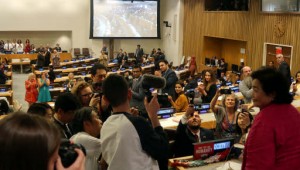 Conveying the message of the antinuclear movement

On October 6, it was announced that the International Campaign to Abolish Nuclear Weapons (ICAN), a non-governmental organization (NGO) that was formed in 2007, has won this year’s Nobel Peace Prize. On the same day, Setsuko Thurlow, 85, an atomic bomb survivor originally from Minami Ward, Hiroshima, commented on this news from her home in Toronto, Canada. Ms. Thurlow said she was very happy with this development and that the prize would provide a big boost to the efforts being made to increase the number of nations willing to join the Treaty on the Prohibition of Nuclear Weapons in order to realize the abolition of nuclear arms.

Ms. Thurlow has been part of ICAN’s activities, sharing her account of the Hiroshima bombing with others in many nations. On July 7, she arrived in a wheelchair at United Nations headquarters in New York to attend the negotiations to establish the nuclear weapons ban treaty. Soon after the treaty was adopted, she delivered a speech, saying, “To the leaders of the countries across the world, I beseech you. If you love this planet, you will sign this treaty.” Her appeal was loudly applauded by the representatives from the national governments at the venue.

Sympathy for the A-bomb survivors and support for outlawing nuclear weapons spread across the world and paved the way for establishing the treaty. The Conference on the Humanitarian Impact of Nuclear Weapons, which was held three times under the leadership of the governments of non-nuclear nations, in 2013 and 2014, played an important part in this process. As one of the NGOs that took part, ICAN actively promoted these meetings and helped communicate information.

The first conference took place in Oslo, Norway. Some groups such as the International Physicians for the Prevention of Nuclear War (IPPNW), which played a central role in founding ICAN, made use of the latest results from scientific research to strongly warn of the potential risks of climate change and famine in the event of a nuclear war. As nuclear nations like the United States, where justification for the atomic bombings is still ingrained, did not sufficiently respond to appeals for nuclear abolition rooted in the A-bomb experience, the non-nuclear nations sought to take a scientific approach instead. Nevertheless, the five main nuclear powers chose not to participate in this conference.

The second conference, in Nayarit, Mexico, became a turning point, according to several participants. The meeting was more focused on the starting point of the antinuclear movement, which involves communicating the devastating consequences of the atomic bombings. Recommended by ICAN, Ms. Thurlow recounted her A-bomb experience at the beginning of the conference, sharing her story when she was a second-year student at Hiroshima Jogakuin Junior and Senior High School. Her account heightened awareness of the fact that only one single bomb could wreak such tremendous damage. Tied to their concern over the dangers of a nuclear explosion due not only to war but also to an accident, an accidental firing, or a terrorist attack, a sense of urgency grew among the nations of the world.

When the third conference was held in Vienna, Austria, 158 countries took part. The wave of antinuclear support had risen so big that the United States and the United Kingdom had no option but to join the meeting in order to oppose the idea of a legal prohibition on nuclear weapons. At that time, ICAN held a gathering for civil society. Ms. Thurlow took part by calling for the elimination of nuclear arms while holding a banner with the names of the 350 students at Hiroshima Jogakuin Junior and Senior High School who had perished in the atomic bombing. At the Vienna conference, the representative from ICAN made a statement which said that the stories of the A-bomb survivors illustrate the fact that nuclear weapons are unacceptable and therefore it is clear that they should be prohibited.

Traveling around the world with young activists

Commenting on her travels around the world with ICAN members, most of whom are of her grandchildren’s generation, Ms. Thurlow said, “As I’m getting old, it’s tough for me to take part in their activities. But when I’m with them, these young people who recognize the importance of the nuclear issue to their own lives and are taking action internationally, it gives me the strength to keep moving my tired body.”

ICAN’s partners in the world have also spread the appeals of the A-bomb survivors. Since 2008, Peace Boat, a Tokyo-based NGO, has organized voyages that provide the opportunity for A-bomb survivors to share their experiences in many parts of the world. Toshiko Tanaka, 78, an A-bomb survivor who lives in Higashi Ward, Hiroshima, traveled to the U.N. in June and called for the adoption of the nuclear weapons ban treaty while taking part in one of the Peace Boat trips. With tearful eyes, Ms. Tanaka said, “Because ICAN has won the Nobel Peace Prize, I feel like we’ve just taken a huge step forward toward abolishing nuclear weapons.”

Mariko Higashino, 65, a second-generation A-bomb survivor and resident of Asaminami Ward, also took part in a Peace Boat voyage and visited the Netherlands last fall. With arrangements made by PAX, an antinuclear group working with ICAN, Ms. Higashino was able to meet with members of parliament there and share her mother’s A-bomb experience with them. The Netherlands still relies on the U.S. nuclear arsenal for its security, but it participated in the talks at the U.N. to establish the nuclear weapons ban treaty.

Ms. Higashino said, “ICAN made use of its network, involving many groups around the world, to widely convey the thoughts and wishes of those who have suffered from the consequences of nuclear weapons, such as the A-bomb survivors and the victims of nuclear testing. I hope this prize will draw more attention to ICAN’s activities.” Seeing a posting on Facebook by a PAX member, celebrating ICAN’s win, she immediately clicked the Like button.