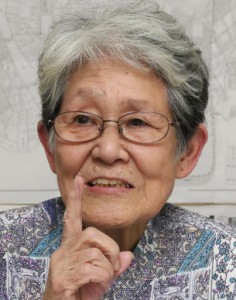 The preamble of the Treaty on the Prohibition of Nuclear Weapons refers to the “hibakusha.” I’m very pleased that the efforts long made by the A-bomb survivors have finally yielded this result.

I heard that it was Austria that proposed including the reference to “hibakusha.” I remember when Alexander Kmentt came to Hiroshima three years ago as the Director for Disarmament of the Austrian Foreign Ministry. I told him about what happened to the students of Hiroshima Municipal Girls’ High School (now Funairi High School) in front of the monument dedicated to the school’s students, and Mr. Kmentt listened keenly. He talked about his anger over the inhumane nature of nuclear weapons and conveyed his determination to pursue the elimination of these weapons.

The memorial to Hiroshima First Municipal Girls’ School, which is inscribed with the names of 676 students and teachers who were killed in the atomic bombing, stands to the south of the Peace Memorial Park. Ms. Yano was a second-year student in high school when she experienced the atomic bombing at her home, located about 4 kilometers from the hypocenter.

I had a stomachache that day (August 6, 1945) so I stayed at home, but other students went to the area around where the monument stands to help tear down homes to create a fire lane. My family lived on the grounds of a shrine. Many people who were burned in the bombing fled to our shrine and then died there. We cremated a lot of bodies.

I didn’t know that all the students and teachers who were working that day had died until I returned to school in September. Some of the teachers, and the relatives of the victims, said that I was unpatriotic for being absent that day and not dying, too. It was so painful to hear this that I felt suicidal. So I tried to avoid facing the hard reality of the bombing for years.

Twenty years after the atomic bombing, my attitude changed when I read the account written by Misao Nagoya, an A-bomb survivor. I was impressed how she came to protest against atomic bombs and war after her sister, who was a first-year student at the high school, perished in the bombing. When I met Ms. Nagoya, she said to me, “I’m so glad you survived.” I began to work with her on editing a series of books of survivors’ experiences titled Burned Like the Leaves of a Tree. I also started to share my A-bomb experience with other people.

On behalf of the A-bomb survivors, Ms. Yano’s brother Toshiki Fujimori, 73, addressed the conference at United Nations headquarters in New York that was negotiating the nuclear weapons ban treaty. Some of the third-generation Hiroshima A-bomb survivors who have shared Ms. Yano’s account attended a demonstration march in the United States.

Before she died of hepatic cirrhosis in 1986 at the age of 56, Ms. Nagoya said that the most frustrating thing was that she had to die without hearing the news that nuclear weapons would be abolished. Many other survivors also died before their appeals were heeded. With the nuclear weapons ban treaty, we must eliminate nuclear arms and comfort the souls of those who died in regret.

However, the Japanese government says that it will not join the treaty, and this infuriates me. Prime Minister Shinzo Abe repeatedly uses the term “national crisis.” I remember hearing this term used many times during the war, when the war was justified and dying for the country was considered an honor. The Japanese government does not challenge the position of the United States, which has said that a military attack against North Korea is one possible course of action. I don’t hear them say, though, that nuclear weapons must never be used.

The hibakusha have always said that “no one” else in the world should have to go through the same terrible experience. I find it unbelievable that the Japanese government doesn’t understand what “no one” means. I feel nothing but anger toward our leaders.

Miyako Yano
Born in Hiroshima in 1931. Became executive director of the Hiroshima Prefectural Confederation of A-bomb Sufferers Organizations (Hiroshima Hidankyo), chaired by Kunihiko Sakuma, in 2010 after serving in such posts as vice chairperson. Shares her experience of the atomic bombing with students on school trips as a peace studies instructor of the organization.