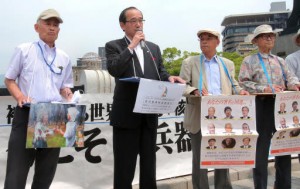 To support the second round of negotiations at the United Nations to establish a treaty that would outlaw nuclear weapons, seven groups of A-bomb survivors in Hiroshima gathered signatures in the city center on June 1. Responding to a request from these groups, Hiroshima Mayor Kazumi Matsui joined their signature drive, called the “Hibakusha Appeal for a Nuclear Ban Treaty,” for the first time. Together with members of the survivors’ groups, Mr. Matsui called for support from passersby near Motoyasu Bridge. The negotiations at U.N. headquarters in New York will begin on June 15.

About 40 people took part in collecting signatures including Toshiyuki Mimaki, 75, the vice chair of the Hiroshima Prefectural Confederation of A-bomb Sufferers Organizations (Hiroshima Hidankyo, chaired by Sunao Tsuboi), and Kunihiko Sakuma, 72, the chair of the other Hiroshima Hidankyo. Mr. Matsui said that the earnest hope of the A-bomb survivors needs to be conveyed to people all over the world and that the nuclear weapon states should participate in the treaty process. He then placed a petition sheet on a board and, for 15 minutes, called on people to add their signatures to the sheet. Local residents and international visitors stopped and wrote down their names.

Promoted by Nihon Hidankyo, the global signature drive was launched in April of last year with the aim of appealing to the nations of the world to realize a treaty that will outlaw and eliminate nuclear arms. Mr. Matsui gave his signature to this effort, too. After helping collect signatures, he told reporters that he will request that the Japanese government join the second round of talks to discuss the treaty, though the government has already announced that it will not take part.

The signatures that are gathered from across the country will be sent to the Tokyo office of Nihon Hidankyo, where they will be counted. Then, during the second round of negotiations, the signatures will be brought to U.N. headquarters by representatives of the A-bomb survivors.