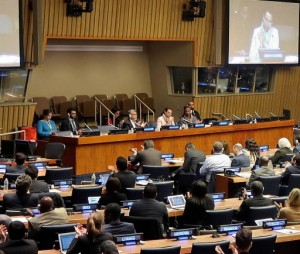 NEW YORK -- The first round of negotiations to establish an unprecedented treaty that would ban and abolish nuclear weapons closed on March 31 at United Nations headquarters in New York. By the end of the five-day conference, the participants had reached broad agreement that the treaty should prohibit the use, development, and possession of nuclear weapons. Elayne Whyte Gómez, the president of the conference, said that she will coordinate the views of the participating nations and present a draft of the treaty by late May.

On the last day of the conference, the representatives of national governments discussed institutional arrangements to accompany the treaty. To monitor compliance with the terms of the treaty, suggestions were made that a conference of parties be held regularly or a related organization be established. They also discussed the needed conditions for the current nuclear powers to become members, if the treaty prohibits nuclear weapons.

At the end of the discussions, Ms. Whyte said that she hopes to present a draft of the treaty in late May, prior to June 1, to the participating states. She also said that a meeting will be held in Geneva to deepen the understanding of the participating nations and that she will seek to have the draft adopted during the next round of talks, scheduled to take place at U.N. headquarters from June 15 to July 7.

According to Ms. Whyte, a total of 115 nations took part in the conference, but the nuclear powers, including the United States and Russia, which advocate gradual nuclear disarmament, did not participate. As a result, only non-nuclear countries will move to implement the treaty. Japan, which relies on the U.S. nuclear umbrella, did not take part in the discussions. On the first day of the conference, Ambassador Nobushige Takamizawa, head of the Delegation of Japan to the Conference on Disarmament, stated in a speech that negotiations without the involvement of the nuclear powers will deepen the schism between the nuclear and non-nuclear states.