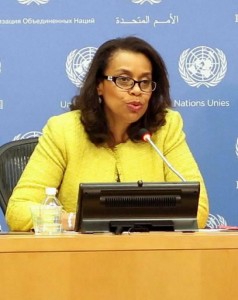 NEW YORK -- On March 30, the fourth day of the United Nations conference to negotiate a nuclear ban treaty, taking place at U.N. headquarters in New York, the conference president and Costa Rican ambassador, Elayne Whyte Gómez, held a news conference. Ms. Whyte Gómez said that soon after the first round of talks ends on March 31, she will begin preparing a draft of the treaty and finish compiling the final text by the end of the following session, scheduled for June 15 to July 7. She said she is optimistic that the treaty can be concluded.

Looking back on the discussions involving the treaty preamble and the activities to be banned under the agreement, Ms. Whyte said that the discussions were constructive and forward-looking and she stressed that the testimonies of the A-bomb survivors reminded the participants of the catastrophic humanitarian consequences that have resulted from the use of nuclear weapons. Ms. Whyte pointed out that more than 115 nations are taking part in the conference. She will urge the nuclear powers and non-participating nations to join the next round of talks.

On March 30, six international lawyers and nuclear disarmament experts took the stage as panelists, and some demanded that, in order to outlaw the security system that relies on nuclear weapons, threatening to use nuclear weapons should also be expressly banned. Others experts urged government representatives to consider ways of getting the nuclear weapon states to participate in the treaty.

Speaking as a representative of one of the NGOs involved in the conference, Akira Kawasaki, the executive committee member of Peace Boat, a Tokyo-based NGO, delivered a speech on the theme of working toward a set of standards for outlawing nuclear weapons. In his speech, Mr. Kawasaki suggested that the treaty preamble should describe the suffering experienced by Hiroshima and Nagasaki A-bomb survivors and that it is important to create a treaty that could be referred to as the “No More Hibakusha Treaty.”