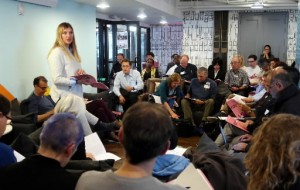 NEW YORK -- On March 27, negotiations to establish a first-ever treaty to outlaw and eliminate nuclear weapons will open at U.N. headquarters in New York. The talks will focus on the contents of the treaty as well as ways to involve the nuclear weapon states, which have expressed their opposition to such an agreement. Inspired by the appeals of A-bomb survivors, non-governmental organizations (NGOs) which support a nuclear ban treaty have organized a series of events near U.N. headquarters, from March 25, in order to give thought to the significance of the U.N. conference and the ideal form for a treaty of this nature. The NGOs are seeking to help fuel momentum for the success of these talks.

The decision to hold the treaty negotiations was made in the U.N. General Assembly last year. Taking the lead in this initiative was a group of non-nuclear nations, including Austria, which has stressed the inhumanity of nuclear weapons through joint statements and international conferences. The current negotiations will continue until March 31, and the participants will discuss the treaty’s preamble, objectives, prohibitions, and related mechanisms. The most likely form of treaty would be one that immediately prohibits any type of act associated with nuclear weapons, including their development, possession, and use. The conference seeks to build consensus among the participating nations and compile a draft of the treaty prior to the next round of negotiations, scheduled from the end of June to the beginning of July.

The International Campaign to Abolish Nuclear Weapons (ICAN), a leading NGO in the field, held an event with the participation of about 100 members from antinuclear groups around the world. ICAN has created partnerships with the nations which support a nuclear ban treaty. During the event, a representative from the International Committee of the Red Cross (ICRC) and an official from the Austrian government took the stage and shared their thoughts on the required prohibitions for the treaty and other topics. The ICAN event will continue until the evening of March 26 and seek to again stress the inhumane nature of nuclear weapons by featuring remarks by A-bomb survivors who experienced the atomic bombing in Hiroshima and others affected by nuclear testing.

Meanwhile, the United States and other nuclear powers, which voted against the U.N. resolution to start these negotiations to establish a treaty, citing national security concerns, are not likely to take part in the conference. The Japanese government is conferring with the conference chair so that Nobushige Takamizawa, the Ambassador, Permanent Representative of Japan to the Conference on Disarmament, will be able to convey Japan’s stance on the treaty when speeches are made by leaders of nations on the first day of the conference, prior to the start of negotiations. Whether or not Japan will ultimately participate more actively in the negotiations is still undetermined.