The Key to a World without Nuclear Weapons: Appeal from the Marshall Islands, Part 5 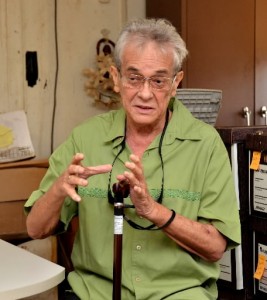 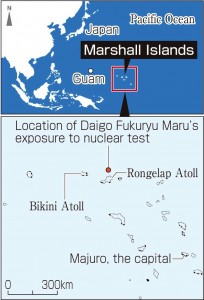 The role of nations that have suffered from nuclear radiation

Are the United States and Russia failing to comply with their obligation to reduce their nuclear stockpiles as stipulated by international law? In 2014, the Marshall Islands brought a complaint to the International Court of Justice (ICJ) in The Hague, Holland, against nine countries which possess nuclear weapons, seeking to prod the international community about this violation of the law. In an interview with the Chugoku Shimbun last month at a hotel in Majuro, the capital of the Marshall Islands, Tony Debrum, 72, the former foreign minister of the Marshall Islands who led this effort, stressed that the abolition of the world’s nuclear weapons is not just an issue of politics or ethics but a matter of sanity.

The defendants in the lawsuit were limited to only the United Kingdom, India, and Pakistan, nations which have accepted compulsory jurisdiction of the ICJ. But on October 5, 2016, the International Court of Justice accepted the argument made by these three countries that they were not involved in a legal dispute over arms reduction with the Marshall Islands. As a result, a substantial trial was not held, and the lawsuit came to an end.

In response to this, Mr. Debrum says that the court did not deny the content of the complaint. With regard to the charge leveled against the United Kingdom, which is a member nation of the Nuclear Non-proliferation Treaty (NPT), the 16 judges were evenly divided. Some take this result to mean that there is dissension among nations when it comes to the abolition of nuclear weapons (Takeya Sasaki, the President of the Japan Association of Lawyers against Nuclear Arms). In January 2017, Mr. Debrum was officially named the “2016 Arms Control Person of the Year” and the courageous action taken by this small country was lauded.

On the other hand, the opinion of some 50,000 people has not necessarily strengthened the momentum for nuclear abolition. Probably because of the national character of the people who live on small islands scattered in the vast Pacific Ocean, they tend to put priority on the interests of smaller units like the family or a single island. According to Giff Johnson, 60, the chief editor of the local Marshall Islands Journal newspaper, it is unlikely that the opinion of the Marshall Islanders will lead to an increase in the call for abolishing nuclear weapons.

As the result of the hydrogen bomb test at Bikini Atoll on March 1, 1954, the residents of Rongelap Atoll were exposed to radioactive fallout from the bomb and, since then, have been relocated to other islands. James Matayoshi, 48, the mayor of the Rongelap Atoll local government, says that it is the role of the nation, not just the local government, to call for the abolition of nuclear arms. Mr. Matayoshi is leaving the nuclear issue in the hands of the national government while working vigorously to promote local industries, such as fish farming, with the goal of having former residents return to the island.

With the aim of raising people’s awareness of the effects of nuclear testing, the Marshall Islands government will hold an international conference titled “The Marshall Islands’ Nuclear Legacy: Charting a Journey Toward Justice” in conjunction with the March 1st memorial day for the nuclear test victims. Experts on nuclear issues will be invited from all over the world to discuss the spread of nuclear damage, which began with the atomic bombings of Hiroshima and Nagasaki.

On October 27, soon after the International Court of Justice rejected the lawsuit over nuclear arms brought by the Marshall Islands, that nation voted for a resolution to start negotiations for a treaty to outlaw nuclear weapons in March 2017. This vote came at the First Committee (on Disarmament and International Security) of the U.N. General Assembly. Although the United States, which advocates a process of gradual phases in nuclear disarmament, strongly opposed the resolution, the Marshall Islands, as a nation whose citizens have suffered from the damaging health effects of the nuclear tests, resisted its “sponsor” which provides financial assistance amounting to approximately 50 percent of the national government’s budget.

Hilda Heine, the president of the Marshall Islands, and John Silk, the foreign minister, have both said repeatedly in public that they will strengthen their efforts to address these nuclear issues and seek justice from the United States.

It was due to its considerable distance from the United States, along with the fact that it is an island nation with a small population, that the Marshall Islands was designated a U.S. nuclear test site. Mr. Debrum’s persistent stance with regard to nuclear arms is that the inhumane consequences of these weapons can never be justified. He was therefore disappointed that Japan, which has also experienced the effects of nuclear radiation, voiced opposition to the U.N. resolution. He says it is only natural that Japan play a leading role in the efforts to realize a world without nuclear weapons and that he wants Japan to take action toward that end. Will Japan take this initiative or will it turn its back on nuclear abolition? The world is watching closely to see what the A-bombed nation will do.