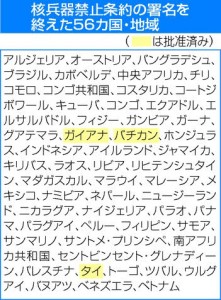 The Treaty on the Prohibition of Nuclear Weapons, which was adopted at the United Nations last July, has been signed by 56 non-nuclear nations and regions in the three months since it opened for signatures on September 20. The treaty will enter into force once 50 nations go through their domestic procedures for gaining consensus, such as congressional approval, and ratify it. Inspired by the winning of the Nobel Peace Prize by the International Campaign to Abolish Nuclear Weapons (ICAN), the non-governmental organization (NGO) that made important contributions to the establishment of the treaty, A-bomb survivor groups and other NGOs plan to urge their governments to sign and ratify the treaty.

On July 7, 122 nations and regions voted in favor of adopting the first international treaty to completely ban all activities involving nuclear weapons, the conclusion of negotiations that took place in 2017 at U.N. headquarters in New York in March and from June to July. By the end of September, 53 nations and regions had signed the treaty, including Austria and Mexico, which led the talks to establish it. On December 8, three more nations, including Jamaica, followed suit.

Three have already ratified the treaty: Thailand, Guyana, and the Vatican. Although the Vatican is not a U.N. member state (member states consist of 193 nations) but a non-member observer state, it is expected to join as a “state party” in the framework of the treaty.

However, the nuclear powers and nations like Japan that rely on the U.S. nuclear umbrella remain opposed to the nuclear weapons ban treaty. Supporters of the treaty are on their guard against the actions of the anti-treaty countries intended to undermine the pro-treaty nations that have not yet signed the treaty. Taking advantage of its connections with 468 partner organizations from 101 nations, ICAN will raise awareness of the significance of the treaty and press governments and parliaments to come to agreement on the treaty so it can enter into force as swiftly as possible in 2018.

The Japan Confederation of A- and H-Bomb Sufferers Organizations (Nihon Hidankyo) has been promoting a signature drive, called the “Hibakusha Appeal for a Nuclear Ban Treaty,” which urges all nations to conclude the treaty in order to ban and abolish nuclear weapons. As of last October, the group had submitted the signatures of 5,153,000 people to the United Nations. Also, two groups of A-bomb survivors in Hiroshima, both known as the Hiroshima Prefectural Confederation of A-bomb Sufferers Organizations (Hiroshima-ken Hidankyo), are making efforts for this signature drive to advance the signing of the treaty by collaborating with other groups such as the Japanese Consumers’ Cooperative Union (JCCU) Hiroshima. Their appeal for support will also make use of the speech delivered at the award ceremony for the Nobel Peace Prize by Setsuko Thurlow, 85, one of the promoters of the international signature drive and an A-bomb survivor originally from Minami Ward, Hiroshima who now lives in Toronto, Canada.