The Key to a World without Nuclear Weapons: Report from Oslo, Part 1 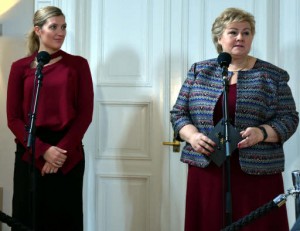 Overcoming resistance toward the nuclear weapons ban treaty in Norway

Is the Treaty on the Prohibition of Nuclear Weapons thought to be a “beacon” for realizing the goal of nuclear abolition? In Oslo, Norway, where the award ceremony for this year’s Nobel Peace Prize took place on December 10 to honor the International Campaign to Abolish Nuclear Weapons (ICAN), the non-governmental organization (NGO) which made a significant contribution toward the establishment of the treaty, the Chugoku Shimbun assessed the responses toward it from governments and civil society.

On December 10, Beatrice Fihn, ICAN’s executive director, represented the winning organization and delivered a speech at Oslo City Hall. When she said, “To the nations who believe they are sheltered under the umbrella of nuclear weapons, will you be complicit in your own destruction and the destruction of others in your name?” many people in the audience, including ICAN members and ambassadors from pro-treaty nations responded with applause. However, Erna Solberg, the Norwegian prime minister, appeared to keep her hands folded in her lap in the front row of seats.

On the following day, December 11, a joint press conference was held with Ms. Fihn and Ms. Solberg. When a Norwegian journalist asked Ms. Solberg about her reception of Ms. Fihn’s speech, she acknowledged that she had not been fully in agreement with the words of her address. She said she had applauded at most of the points made, but that there were two points she honestly could not support and so she had refrained from clapping. She went on to say that she held a different view about how nuclear abolition should be achieved and stated firmly that she would not sign the nuclear weapons ban treaty. She argued that the treaty is not aligned with Norway’s security policy, as a member nation of the North Atlantic Treaty Organization (NATO), which relies on the deterrence of the U.S. nuclear arsenal.

Rather than responding with criticism, Ms. Fihn offered words of hope for Norway. She said that Norway has traditionally played a leading role in advancing nuclear disarmament and demonstrated a strong sense of humanitarianism. She added that ICAN’s partner organizations and citizens would continue to act until the Norwegian government decides to join the treaty, too, and that they will be unflagging in their efforts.

Norway is one of the nations under the U.S. nuclear umbrella that ICAN will seek to press to participate in the treaty. In 2013, the Norwegian government hosted the first Conference to Confirm the Inhumanity of Nuclear Weapons in Oslo. Such conferences were held three times and helped fuel the momentum for establishing the treaty. In the past, Norway also took the lead in the negotiations to establish the Convention on Cluster Munitions through the so-called “Oslo process.”

However, Norway did not take part in the talks to establish the nuclear weapons ban treaty. Some have pointed out that the nation changed its attitude toward nuclear abolition after the first international conference was held in Oslo because the administration changed from the Labor Party to the Conservative Party. Jens Stoltenberg, the former Norwegian prime minister who is now the secretary general of NATO, is also opposed to the treaty. Because of a border issue that has arisen between Norway and Russia, that nation has now placed greater emphasis on NATO policy. But Berit Reiss-Andersen, the chair of the Norwegian Nobel Committee, is reportedly a lawyer affiliated with the Labor Party.

On December 9, Stine Rodmyr, the leader of “No to Nuclear Weapons,” the local group that works with ICAN, held a meeting with A-bomb survivors and stressed that approaching the parliament is important in order to persuade the government to join the treaty. Ms. Rodmyr’s group has regularly issued a booklet to convey the need to ban nuclear weapons, promote the talks to establish the treaty at the United Nations, and convey the wishes of the A-bomb survivors. They distribute this booklet to lawmakers and follow up by exchanging views with them.

The Norwegian parliament is actively looking at the treaty. According to a local newspaper, a bill to study the significance and ramifications of the treaty, in the event that the government signs it, is expected to be approved early next year. This bill is led by the opposition party, which is calling for positive consideration of the treaty. Some members of the ruling party will reportedly support the bill, too. Akira Kawasaki, a member of ICAN’s international steering committee, said that he was briefed about the bill when he met with the president of the parliament on December 11. Sharing his hopes, Mr. Kawasaki said, “I think the same approach to studying the treaty should be carried out in Japan as well. We can then have a thorough discussion with the government about how Japan could take part in the treaty.”

At the press conference, Ms. Solberg said that the accounts of the A-bomb survivors have shown them why they must act for a world without nuclear weapons, and she stressed the significance of the speech at the award ceremony that was made by Setsuko Thurlow, 85, an A-bomb survivor from Minami Ward, Hiroshima. On December 12, Terumi Tanaka, 85, the co-chair of the Japan Confederation of A- and H-Bomb Sufferers Organizations (Nihon Hidankyo) who attended the ceremony, held a press conference in Norway and looked back on his participation in the first international conference on the inhumanity of nuclear weapons in Oslo in 2013 with deep emotion. He said forcefully, “I hope that Norway will ratify the treaty in the not-so-distant future.”

International Campaign to Abolish Nuclear Weapons (ICAN)
An international organization that was formally established in Australia in 2007. Currently, it consists of 468 NGOs from 101 nations. As the representative NGO, ICAN called for outlawing nuclear weapons at the three international conferences on the inhumanity of nuclear weapons (held from 2013 to 2014), which were organized under the leadership of the non-nuclear nations, and helped fuel the momentum for establishing the nuclear weapons ban treaty in July of this year. ICAN is now based in Geneva, Switzerland.