Seventy-five years after the atomic bombing—Survivors’ groups at crossroads, Part 3: A single member 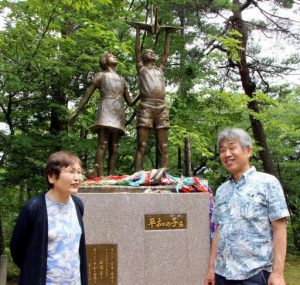 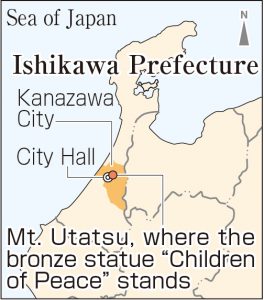 
Entrusting peace movement to friends
“Come what may, I’ll definitely continue conveying my A-bombing experiences as long as I’m alive,” said Tamiko Nishimoto, 79, a resident of the city of Kanazawa and president of an Ishikawa prefectural association of atomic bomb sufferers. “I’m not particular about how, because my friends will carry on my ideas about this issue.” She glanced at Masami Kawasaki, 65, a former elementary school teacher living in the prefecture’s city of Hakusan. Together, they have been calling for peace over a period of about 20 years.

A total of 69 A-bomb survivors live in Ishikawa Prefecture, but Ms. Nishimoto is the only one still active and speaking about her A-bombing experiences. Some members of the association used to be passionate about the group’s efforts, but gradually they have been admitted to nursing homes or died. Most of the association’s members are members in name only.

On the day the atomic bomb was dropped on Hiroshima 75 years ago, Ms. Nishimoto was four years old and at her home in Danbara-suehirocho (now part of Minami Ward), about 2.3 kilometers from the hypocenter. Immediately after hearing a boy shout “B-29,” she was exposed to a flash of light.

She spent three days in a field of grapes near her house. The image of a girl lying near her is deeply embedded in her memory. The girl appeared to be a student and suffered burns over her entire body. Her face was swollen and lacked any expression.

Ms. Nishimoto then lived in the town of Yachiyo (now part of Akitakata City), where her father was from. She moved to municipal housing in Hiroshima’s Motomachi (now part of Naka Ward) when she was in the second grade. The house was shoddy, life was difficult, and many residents had lost family members. “I lived surrounded by people whose lives were ruined by the atomic bombing,” she said. “As an A-bomb survivor, it was only natural for me to call for the elimination of nuclear weapons.”

While employed as a clerical worker for an insurance company, Ms. Nishimoto took part in activities of the Japan Council against Atomic and Hydrogen Bombs. Her family moved to Kanazawa City in 1974, because of her husband’s job transfer. There she joined the Ishikawa prefectural association of A-bomb sufferers, which had been established in 1960.

In the Hokuriku region of Japan, far from Hiroshima, few knew that A-bomb survivors lived there. At its peak, Ishikawa Prefecture had about 240 survivors, but Ms. Nishimoto said, “Many did not tell anyone. There was terrible discrimination in marriage and other fields.” She supported people who were suffering from aftereffects and helped them apply for an Atomic Bomb Survivor’s Certificate or A-bomb disease certification.

Hoping to create a symbol of peace for Ishikawa Prefecture that would convey the tragedy of the atomic bombings, Ms. Nishimoto and her friends erected a bronze statue, “Children of Peace,” on Mt. Utatsu in the eastern part of Kanazawa City. They asked a local folk music group to compose a song of the same title as the statue. Mr. Kawasaki, the former elementary school teacher, was a member of the musical group.

The song has been sung during a peace rally held at the end of July every year. The song was made into CDs in June last year, and the discs were donated to all elementary schools in Ishikawa Prefecture. This project was carried out by a committee composed of 14 members including Mr. Kawasaki and members of a local choir and groups interested in peace issues. The committee members made the CDs based on Ms. Nishimoto’s hope to “make the song into something tangible while the survivors’ association still exists.”

One of their new activities is the creation of picture-card show describing the experiences of Mikiso Iwasa, 91, a resident of the city of Funabashi, Chiba Prefecture. Mr. Iwasa experienced the atomic bombing in Hiroshima when he was 16, and he later became the founder of the Ishikawa survivor’s association. They found the unused set of picture-cards drawn by elementary school students about 30 years ago. After listening once again to Mr. Iwasa’s story, the committee has revised the story. The story comprised of 24 pictures will be completed at the end of August.

The first public performance of the picture-card show was scheduled to be held during a peace rally at the end of July. But, due to the spread of the coronavirus, the event had to be canceled. Still, Ms. Nishimoto appreciates what Mr. Kawasaki and his fellow committee members are doing. “The final day of the A-bomb survivors’ group will eventually arrive. But I believe that peace activities will definitely continue in Ishikawa,” she said.