Striving to fill voids in Hiroshima 75 years after the atomic bombing—Calling into question government’s obligations, Part 2: Give back victims’ lives 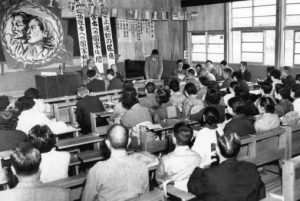 
Compensation to all victims would prove renunciation of war and non-nuclear principles
Yoko Kubo, 81, a resident of Kaita-cho in Hiroshima Prefecture, was staying with her relatives on the outskirts of Hiroshima City when the atomic bomb was dropped. She was six years old and lost five family members in the bombing. She never forgot her grandmother saying under her breath: “But, you all lost your parents and your homes.” Her words derived from dissatisfaction with the actions of the government, which failed to provide support to those who were forced to lose so much at an early age.

Around that time, in 1956, the Japan Confederation of A- and H-Bomb Sufferers Organizations (Nihon Hidankyo) was formed. The group announced the outline of a “relief law” demanding that the central government provide relief to “A-bomb victims,” for whom it should take responsibility. They defined A-bomb victims as: “Both those who died in or those whose health was impaired by the atomic bombing and those who are dependent on such individuals for their livelihoods.” Bereaved families who did not directly experience the atomic bombing, as was the case with Ms. Kubo, were also included in the definition.

“Madoutekure” is the phrase the late Heiichi Fujii used to express his feelings at the time of an interview conducted at Hiroshima University while he was alive. Mr. Fujii, a native of Hiroshima City, was involved in making the outline as the first secretary general of Nihon Hidankyo. “Madoutekure” means, in Hiroshima dialect, “Give it back to us just as it was” or “Compensate us.”

Mr. Fujii was a university student in Tokyo at the time his father and sister were killed in the atomic bombing. Later, he returned to his hometown and learned of the difficulties that the people of Hiroshima faced in the aftermath of the bombing in his role as a social worker. He took the lead in campaigns to provide relief to the victims and to protest atomic and hydrogen bombs, sacrificing the family business that specialized in stocks of rare wood. “I am not an A-bomb survivor, but a person who lost family in the bombing. I want to declare, ‘Give my father back, give Hiroshima back,’” he would say.


Called “red ogress”
At the inaugural meeting of the Hiroshima Prefectural Confederation of A-bomb Sufferers Organizations (Hiroshima Hidankyo), held in 1956, a banner calling for “National redress” hung from above. Shizuko Abe, 93, a resident of Hiroshima’s Minami Ward, joined the campaign to provide relief to A-bomb survivors “out of desperate hope.” Her face and the right side of her body had been severely burned in the atomic bombing.

When Ms. Abe walked around in public, she would sometimes be called “a red ogress,” due to the color of her burn scars. “The campaign was the result of our sheer desire that such a tragedy, from which we were deeply scarred and needed help so badly, would never happen again to anyone.” On behalf of the campaign, she took her young child to Tokyo and stood herself in front of people, exposing her scars, to petition the Japanese Diet.

Finally, in 1957, the campaign bore fruit and the former Atomic Bomb Medical Relief Law was enforced. That proved to be a step forward in the support of the survivors. However, the law did not include provision to the bereaved A-bomb families of condolence money or survivor pensions, which were also demands made by Nihon Hidankyo.

Later, the “Campaign against atomic and hydrogen bombs,” which had marched together with the campaign to provide relief to A-bomb survivors, split from Nihon Hidankyo due to a conflict of aims. Hiroshima Hidankyo also split into two groups. Still, they continued to appeal for compensation to be provided by the national government. In the 1970s, Hiroshima Hidankyo, chaired by the late Ichiro Moritaki, started an independent survey of atomic bomb victims to pressure the government, which had not carried out such a survey, for compensation by digging up names that had been forgotten.

A-bomb survivors were sometimes criticized as being “selfish,” because they did not drop their demands even after measures to support the survivors were introduced. Even so, Hiroshima Hidankyo tenaciously demanded further compensation based on the example of the country’s policy on “relief for war dead.”


Assistance provided to military personnel
In 1952, the national government enacted the “Act on Relief of War Victims and Survivors” to support military and paramilitary personnel, thereby establishing a pension system for those groups. Under provision of the act, mobilized students and civil defense volunteers are classified as “paramilitary” in nature. Therefore, junior high school students who were mobilized to tear down houses for fire lanes and died in the atomic bombing are treated as “war dead.” However, infants, women and the elderly who were at home at that time are not treated as such. The country’s pledge to renunciate war and its non-nuclear principles will be realized only when all victims, including civilians, are compensated. That is what is at question.

Although the public’s awareness of the compensation issue, which A-bomb organizations still call for, has dwindled over the years even in the A-bombed city of Hiroshima, Toshiyuki Mimaki, 78, resident of Kitahiroshima-cho and National Commissioner of Nihon Hidankyo, has not given up on the issue.

Children evacuated in groups from Hiroshima City became “A-bomb orphans” after losing entire families in the bombing. One organization held an event to publicize the testimonies of the A-bomb orphans. Mr. Mimaki said, “The grief and suffering of children who lost parents at an early age exceeded our imagination. The government not only demanded that they endure, it also could have done something for them but didn’t.”