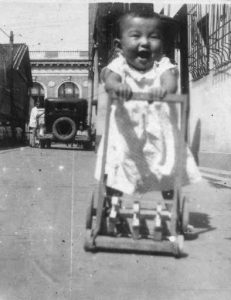 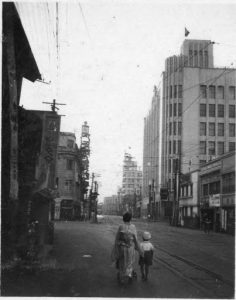 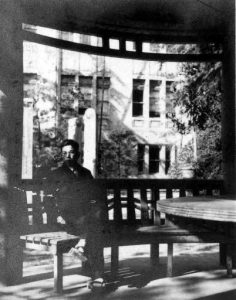 
All six in family smiling
Photo albums containing more than 3,000 photographs were recently donated to the Hiroshima Peace Memorial Museum, in the city’s Naka Ward. The photos were left behind by Rokuro Suzuki, who used to run a barbershop in downtown Hiroshima prior to the atomic bombing. Evidence of the existence of his family, all of whom died in the bombing, is etched into the photos. They represent precious images that fill the “voids” in photographic materials depicting Hiroshima’s cityscapes before the bombing. The museum is working to organize and display the photos in the New Arrivals Exhibit at the museum next year, as well as at other occasions.

Among the photos is one that depicts the Hatchobori area in Hiroshima’s downtown (now Naka Ward), where the Fukuya Department Store and other buildings stood side by side. Another photo shows one of Rokuro’s children playing in front of his barbershop near the Hondori shopping street. The photos convey the bustling atmosphere of the city and the daily lives of Rokuro’s family, full of smiles, before the atomic bombing. In his photo albums, Rokuro wrote of his feelings about his children, describing one as, “He is just like me in my childhood.”

However, the daily lives of the family of six were taken by the atomic bombing. Rokuro, then 43, his oldest son Hideaki, 12, his oldest daughter Kimiko, nine, his second son Mamoru, three, and his second daughter Akiko, one, fell victim to the atomic bombing. His wife Fujie, 33, who suffered serious injuries in the bombing, threw herself into a well after learning that no one in her family appeared to have survived the bombing.

Rokuro is thought to have taken the photos to a relative’s house before the atomic bombing. His nephew Tsuneaki Suzuki, 88, a resident of the area of Fuchu-cho, Hiroshima, had kept the photos in storage at his home. Because the photos have suffered more and more damage recently as time passed, at the end of last year he decided to donate them to the museum.

Tsuneaki had practically been a member of the Suzuki family, even having played with Hideaki in a river on the day before the atomic bombing. Tsuneaki said, “The family was really close. I hope people around the world have the chance to view the photos at the museum.”

In 2014, the museum received from Tsuneaki the image data for about 700 photographs taken by Rokuro. With donation of the new data, the museum indicated it has now obtained all his photographs and received new information from the collection. Kayo Takahashi, a curator at the museum said, “It appears as if each of the houses and buildings in the neighborhood jump right out at you, centered on Rokuro’s barbershop.”

Last fall, in advance of Tsuneaki’s donation of the photo albums to the museum, the Chugoku Shimbun received Rokuro’s photo data from Tsuneaki. The newspaper successively displayed a portion of the photos to the public on its website “Striving to fill voids in Hiroshima: Recreating cityscapes,” which was initiated in January this year.