Striving to fill voids in Hiroshima 75 years after the atomic bombing—Recreating cityscapes: Symbols of military city in Motomachi area 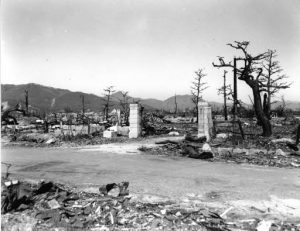 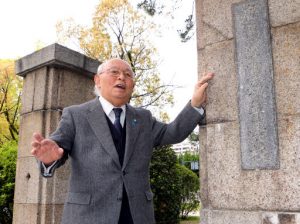 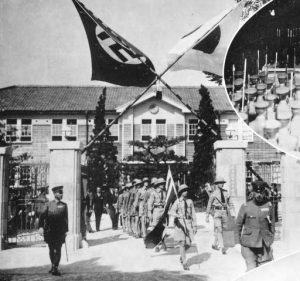 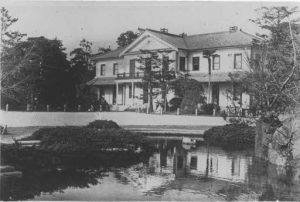 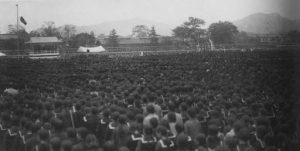 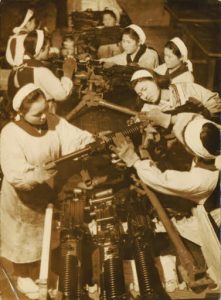 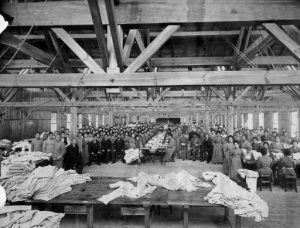 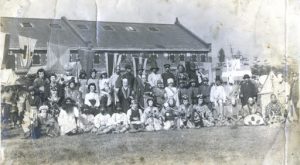 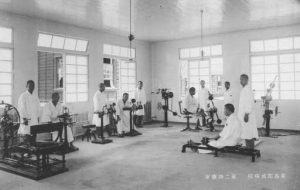 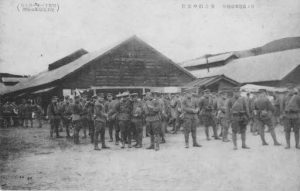 With its experience of the atomic bombing, Hiroshima has become a “city of peace.” Nevertheless, it once served as a major military hub for the former Imperial Japanese Army. In particular, in the Motomachi area (Naka Ward) and its surroundings, military facilities and troops were concentrated around Hiroshima Castle after the Japanese Army’s fifth division was established in the Meiji Era (1868-1912). Across the street from bustling shopping districts such as Hatchobori and Kamiya-cho, Motomachi’s atmosphere was decidedly different. Other parts of the city, not only Motomachi, were also home to military facilities and private factories that served the military. Through photographs, this article will take a look at Hiroshima’s past as a “military city” prior to the atomic bombing.


Days of training day to become officer
Many soldiers killed
One such photo shows young people marching through a gate above which flagpoles of Japanese and Nazi Germany flags are crossed. On the façade of the building is the Imperial crest of the chrysanthemum. The photo is believed to have been taken in front of the Hiroshima Army Cadet School around 1938. Shown this photo, Sadao Takasaki, 89, a resident of Hiroshima’s Saeki Ward and professor emeritus at Hiroshima University, immediately responded, “Hitlerjugend” (Hitler Youth, a Nazi youth organization). “This was when they visited Japan after Japan and Germany concluded the Anti-Comintern Pact,” he said.

The school was located on the northeast side of Hiroshima Castle. The school’s restored gateposts of the main gate remain to this day. At that time, adolescent boys aged 13 and 14 with excellent academic records came to the school from around the country. They would study at the school for three years and be housed in the school dormitory. Mr. Takasaki, originally from Kagawa Prefecture, entered the school in the spring of 1944 with the aim of becoming a military officer.

In addition to studying Japanese and mathematics, students received kendo and military training and learned to stand and walk like soldiers. On the drill grounds, “We trained hard in anticipation of live-ammunition drills in the fall of our second year,” said Mr. Takasaki.

In June 1945, the Inspectorate General of Military Training ordered all students to move to the city suburbs for the sake of safety. Two months later, on the day of the atomic bombing, the school, located 1.3 kilometers from the hypocenter, was burned to the ground, except for a few of its structures. “We had fled to a safe place and survived. I feel sorry for those who were still in Hiroshima,” said Mr. Takasaki.

The Record of the A-bomb Disaster estimated that about 10,000 soldiers were killed or wounded in the vicinity around Hiroshima Castle. Akira Asahara, 93, a resident of the city of Akitakata, belonged to the Infantry Reserve Unit No. 1 (Chugoku Unit 104). He had just left the military barracks near the castle and was headed for the East Military Drill Ground (now part of Higashi Ward) for training when the atomic bomb was dropped. In a booklet compiled by an A-bomb survivors’ group in the town of Takamiya, he wrote, “Bodies of fellow soldiers who were orderly marching along simply melted, virtually disappearing… I saw countless charred legs in the moat of Hiroshima Castle, as bodies were blown by the blast and sank headfirst into the moat.” Among the 150 first-year soldiers, Mr. Asahara was the sole survivor.

In the post-war Motomachi area, the Hiroshima prefectural government office and a municipal hospital were established. The district became crowded with barracks-like housing built by war survivors. Later, high-rise apartment buildings were built in the area now filled with greenery. Plans for the construction of a soccer stadium in the area are underway. As time has passed, aspects related to the military, the atomic bombing, and post-war reconstruction have all but disappeared.


Military facilities around city
Teenagers worked to “serve country”
Hiroshima was a city that enjoyed good water transport, with boats plying its rivers. In 1889, Ujina Port (now Hiroshima Port, located in Minami Ward) was completed. Five years later, the Sino-Japanese War broke out, and the Ujina line, a military railway, was laid between Hiroshima Station and the port. With that, Hiroshima became a base for sending troops to mainland China. The Imperial Headquarters, the supreme military command under direct control of Emperor Meiji during the war, was temporarily moved to Hiroshima Castle, at which extraordinary sessions of the Imperial Diet were also convened.

As the Pacific theater of World War II intensified, young workers were sent to war fronts, with teenage boys and girls mobilized to work at Hiroshima Machinery Works, the Hiroshima Shipyard of Mitsubishi Heavy Industries, Toyo Kogyo, and other such factories. Students at what are now junior high and high schools were also mobilized to work at private munitions factories.

Motonobu Okajima, 89, a resident of Saeki Ward, engaged in the dangerous work of filling cartridges with gunpowder at the Army Ordnance Supply Depot when he was a third-year student at the former Shudo Junior High School. Although he was deprived of opportunities to learn at school, he worked “to serve his country.”

The atomic bombing indiscriminately incinerated military facilities and civilians alike. The Ordnance Supply Depot, located 2.8 kilometers from the hypocenter, became a temporary relief station after the bombing, with many of the injured transported there. When the depot was demolished after the war, classmates of former mobilized students erected a monument on the grounds of Shudo Junior and Senior High School, their alma mater. Incorporated in the monument are bricks of the depot’s outer wall and the words “Living amidst history,” from a piece of calligraphy by the late Ikuo Hirayama, a prominent Japanese-style painter and former mobilized student.

Said Yoshiro Ishimoto, 90, a resident of Naka Ward and a classmate of Mr. Hirayama, “We must never again experience a time when our only pleasure is living for country and emperor.” That is the lesson a then young man who lived through those times of militarism hopes to impress upon the minds of young people.