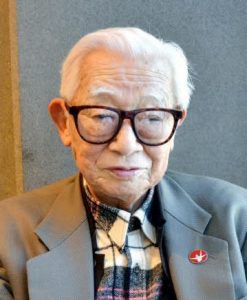 Mikiso Iwasa, former co-chair of the Japan Confederation of A- and H-Bomb Sufferers Organizations (Nihon Hidankyo), died of pancreatic cancer at his home in Funabashi, Chiba Prefecture, at 3:19 a.m. on September 7. He was 91. Mr. Iwasa, who was originally from Fukuoka Prefecture, experienced the atomic bombing in Hiroshima. He later worked to collect and preserve survivors’ A-bomb accounts. His funeral will be held with only close relatives in attendance. His son, Noriaki Iwasa, will serve as chief mourner.

Mr. Iwasa was 16 and a student at Shudo Junior High School at the time of the atomic bombing. He and his mother were in the yard of their home in Fujimi-cho (now part of Hiroshima’s Naka Ward), about 1.2 kilometers from the hypocenter. His younger sister, a first-year student at First Hiroshima Prefectural Girls’ High School (now Minami High School), was being mobilized to help tear down houses and create fire lanes for the war effort. Both his mother and sister died in the bombing.

Mr. Iwasa started teaching at Kanazawa University in Ishikawa Prefecture in 1953, and established a group of A-bomb survivors living in the prefecture in 1960. He served as the group’s first president until 1994. In that same year, he retired from his professorship at the university and was appointed professor emeritus. Mr. Iwasa became assistant secretary-general of Nihon Hidankyo in 2000 and co-chair in 2011. He served as an adviser to the organization starting in June 2017.

While struggling with diseases such as skin cancer, he continued to call on the world to eliminate nuclear weapons. “I was fated to live the life of a hibakusha, but I’ve long pushed against this fate,” he would say. As a Nihon Hidankyo expert committee member, Mr. Iwasa put enormous effort into ensuring realization of the Atomic Bomb Survivors Relief Law, which was ultimately enacted in 1994. He later voiced his demand that the national government revise its A-bomb disease certification system.

In 2011, Mr. Iwasa, working jointly with author Kenzaburo Oe and others, founded and became representative director of the “No More Hibakusha Project,” an organization that preserves records of A-bomb survivors as archived memories. He directed his efforts toward collecting A-bomb survivors’ testimonials and records of their related activities, sharing the information with others using the internet and other such avenues. He was in attendance when then U.S. President Barack Obama visited Hiroshima in 2016.