Striving to fill voids in Hiroshima 75 years after the atomic bombing— Calling into question government’s obligations, Part 4: Protest against “division” 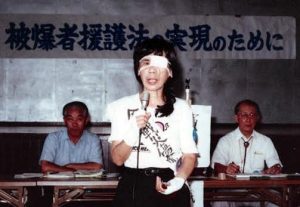 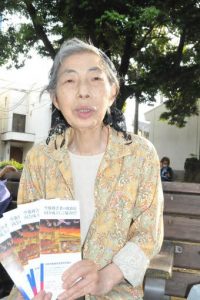 by Yo Kono and Kyosuke Mizukawa, Staff Writers


Those who experienced air raids and A-bombings are both victims—Efforts seeking expanded relief continue
Japan’s national government has consistently refused to pay condolence money to those killed in the atomic bombings, insisting such an act “would ignore the balance among all victims including those of air raids.” Conversely, it has refused to pay compensation to air-raid victims because such money “would upset the balance between such victims and A-bomb survivors.”

Protesting against government policy designed to divide victims and force them to endure suffering, civilian air-raid victims hoped that the A-bomb survivors’ movement would make a breakthrough in expanding relief measures to cover more victims. “If the Atomic Bomb Survivors Relief Law didn’t pass, our relief bill would never pass. That was our catchphrase,” wrote Chisako Sugiyama in her autobiography published in 1999. Ms. Sugiyama, who died in 2016 at age 101, led the air-raid victims’ movement.


Generous benefits provided to military veterans
Ms. Sugiyama was wounded in an air raid on Nagoya, losing her left eye. She could never understand why the national government provided generous benefits to military veterans and civilian employees of the military, while neglecting civilians wounded in air raids. In 1972, she established a national liaison committee of the war-disabled. The Nagoya-based group called on the government to provide support to such individuals as well as to bereaved families of the dead.

After then, she would visit Hiroshima and Nagasaki every year in August. At first, some in the group expressed reluctance to collaborate with A-bomb survivors, because of the idea that A-bomb survivors had suffered greater hardships. Nevertheless, she cultivated a friendship with the late Ichiro Moritaki, who served as chair of the Hiroshima Prefectural Confederation of A-bomb Sufferers Organizations. With a bandage over her eye, she would grab a microphone and appeal for realization of the Atomic Bomb Survivors Relief Law as part of a policy of national compensation.

Starting in 1979, over the span of six years, Seiichi Aruga, 61, accompanied Ms. Moritaki as a supporter. Mr. Aruga, a member of the Tokyo metropolitan area’s Hino city assembly, said, “In a sense, the national government took advantage of the ‘rift’ between A-bomb survivors and other victims of the war. I strongly believed we should speak as one.” In 1981, their group together with A-bomb survivors’ groups jointly wrote and submitted a request to the national parliament, the Diet, demanding that condolence money be paid to the dead from the A-bombings and air raids.

However, the Atomic Bomb Survivors Relief Law, which was enacted in 1994, did not refer to “national reparations,” a situation that disappointed Ms. Sugiyama. The law also lacked mention of provision of condolence money to the dead, making its contents far from effective in paving the way for relief to civilian air-raid victims.

Ms. Sugiyama later served as an advisor to the national liaison council of air-raid victims, a body formed in 2010. This Tokyo-based group called for the establishment of a law to provide relief to air-raid victims. Setsuko Kawai, 81, a resident of Chiba’s Chuo Ward, now leads the movement as the group’s deputy secretary-general, taking part in gatherings and demonstrations.

On March 10, 75 years ago, when Ms. Kawai was five, her mother and two younger brothers were killed in the Great Tokyo Air Raid. Her father suffered severe burns. With bandages on his burns, he came to get Ms. Kawai, who had been evacuated to a safer place. Her father went through painful skin-graft surgeries, but he was not provided with support from the government. Considering that more than 50 trillion yen has been spent for former military veterans and civilian military workers, Ms. Kawai feels inconsolable about the “absurd” gap.


Nonpartisan group pushes for enactment of law
To date, 14 bills to support air-raid victims have been introduced in the Diet mainly by opposition parties, but all have been rejected. The current bill is supported by a nonpartisan group of lawmakers formed in 2011. The group is trying to help pass a law for providing special benefits of 500,000 yen to each victim of air raids who suffered physical disabilities or keloid scars. The families of such victims are not eligible for the benefit, but ‘one law can lead to another.’ The group also calls for the conduct of fact-finding surveys and construction of memorial facilities.

Former Chief Cabinet Secretary Takeo Kawamura, who heads the group of lawmakers, said, “The national government launched the war. It is natural that it should offer consolation to both A-bomb and air-raid victims.” Mr. Kawamura, a member of the Liberal Democratic Party, represents Yamaguchi Prefecture’s third district. Mito Kakizawa, secretary-general of the group and an independent Diet member representing the Tokyo proportional representation block, said, “If a law covering civilians can be passed, it would serve as a deterrence to reckless wars in the future.”

Due to the spread of COVID-19, the nonpartisan group has not held meetings since March 27, but it aims to help realize passage of the bill drafted by Diet members during this ordinary Diet session.

Earlier, in February, A-bomb survivors belonging to the Japan Confederation of A-bomb Sufferers Organizations attended a meeting held in the Diet building and promised that they would cooperate with the group. This year marks the 75th anniversary of the end of the war. If enactment of the law encourages the national government to investigate war damages, it would represent an opportunity to shed light on unknown damage caused by air raids and the atomic bombings, as well as on the lives of forgotten people. “War victims” would speak as one and continue to call to account the national government for its wartime responsibilities.