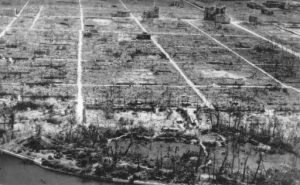 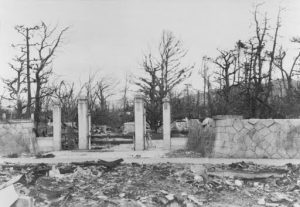 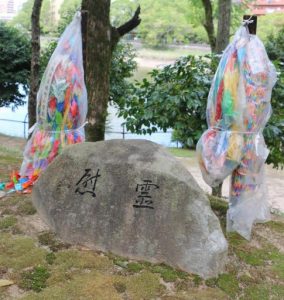 After garden was destroyed in A-bombing, recovery involved trees being replanted and structures rebuilt based on traces of foundations and drawings On August 6, 1945, the day Hiroshima’s cityscape was burned to the ground in the atomic bombing, Shukkeien Garden (now part of the city’s Naka Ward), 1.3 kilometers from the hypocenter, was also reduced to ashes. Now, 75 years later, the garden has been restored so that almost no traces of destruction can be found anywhere on its premises. How was Shukkeien, which this year marks its 400th anniversary, able to regain its former glory?

In the summer of 1987, an excavation survey carried out by the Hiroshima Prefectural Board of Education unearthed the remains of 64 bodies at the garden’s north end facing the Kyobashi River. Found there was what remained of A-bomb victims who had been buried just after the bombing. In the following year, a cenotaph designed for commemoration of the victims was erected by a group formed of local neighborhood associations and others. Since that time, a memorial service for the A-bomb victims has been held at the garden in the summer every year.

Shukkeien Garden was a site where neighboring schools and residents evacuated at the time, and for that reason, it is thought that several thousand died among the huge numbers of people that besieged the park after the atomic bombing. Kikuo Okabe, 71, a resident who lives next to the garden to the west, has continued to attend the memorial service every year starting about a decade ago. “The number of people who know about the history of the atomic bombing has declined in our local community,” he said. “I want to pay my respects to the victims’ remains and convey the fact that those found in the excavation represent only some of all the victims who died in the garden.”

After being destroyed in the bombing, Shukkeien Garden was used as a classroom of sorts for the Noboricho National School (present-day Noboricho Elementary School) during a time right after the end of the war. In 1947, the Hiroshima prefectural government allocated a budget for a plan to reconstruct the garden, aiming at its redevelopment as a park. The restoration project kicked off in 1949.

At first, restoration began with removal of rubble that had been transported after the bombing to the garden from nearby areas. The late Seishi Toyota, a poet who was also involved in the project as a prefectural government official (and died at the age of 90 in 2011), looked back on that period in his book titled Hiroshima Zuiso (Hiroshima Essays). Mr. Toyota wrote that people who had built huts in the garden as residences were involved in the restoration work. In the initial phase, one purpose of the restoration efforts was to ensure employment for the people during the chaotic post-war period.

In 1951, Shukkeien Garden was able to reopen after pine, Japanese plum, and other trees had been replanted. But those reconstruction efforts did not extend to the structures in the garden. Tetsukazu Kamiyama, 72, a resident of Asaminami Ward, who visited the garden in 1956 with his family when he was a second-grade elementary school student, said, “All the trees in the garden were still short in stature, and the only eye-catching objects were the stone lanterns scattered there.”

In 1961, the garden’s front gate was reconstructed. In 1963, restoration of Seifukan, the garden’s main teahouse-style building, was initiated. As there were no detailed pre-bombing drawings of the structure available, the Seifukan restoration project faced difficulties. That was because the reconstruction work was conducted on a trial-and-error basis while confirmation was made of remains of the foundation stones, postcards from before the war, and old paintings and drawings of the garden created during the Edo era in Japanese history. Despite such challenges, reconstruction of the building was completed the following year.

Sokei Ueda, 75, 16th Grandmaster of the Ueda Soko Ryu, a school of Japanese tea ceremony, recalled people’s enthusiasm around the time of the Seifukan reconstruction. “The tea ceremony held at Seifukan was filled to the brim with around one-thousand guests packing the place.” He added, “I guess citizens in Hiroshima were seeking culture that could somewhat satisfy their spirits.”

Restoration of the garden structures, which had remained since the Edo period until their destruction in the atomic bombing, was finished with completion of the teahouse Meigetsutei, in 1974. In 1976, an administrative building was built in the garden, putting the finishing touches on the restoration project around 30 years after its start.

There were twists and turns regarding the nature of how the garden should be used. In 1964, it was developed into a modern-style park with construction of a fountain pond and a flowerbed in the form of the family emblem of Hiroshima’s feudal lord family Asano during the Edo period, near the current front gate. However, Mirei Shigemori, a prominent garden historian (1896–1975), criticized such alterations in one of his books, in which he wrote that the artistic value of the entire Shukkeien Garden had been disturbed. Later, the pond and flowerbed were removed.

How the garden should be communicated to people is an issue for everyone to consider. It is important to preserve the beauty from the Edo era that was successfully recovered through the restoration process. Meanwhile, Mr. Okabe is concerned that citizens in Hiroshima might have a sense of familiarity with the garden but at the same time might vaguely think of the garden as a place they cannot feel free to visit. “I hope citizens can consider the garden a place where they can have fun more casually,” said Mr. Okabe.

In recent years, Shukkeien Garden has become a popular spot among international tourists. Last fiscal year, the garden welcomed about 295,000 visitors. However, because of the coronavirus pandemic, the visitor number for this fiscal year is hovering around 24,000 as of September 14. In this milestone year commemorating the 4ooth anniversary, people should think about visiting this pride of Hiroshima to reflect on both its past and future as a daimyo, or feudal lord, garden.