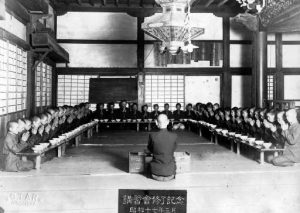 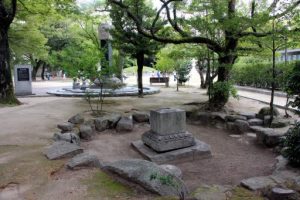 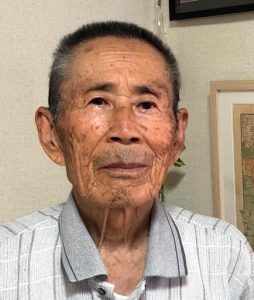 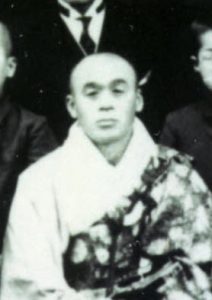 
Mr. Nikamoto has kept photos of temple destroyed near hypocenter
Young boys slept side by side in expansive main hall of temple
Photographs showing the inside of the main hall of Jisenji Temple before the atomic bombing have been identified. Jisenji Temple, which once stood in what is now Hiroshima Peace Memorial Park (in the city’s Naka Ward), was located near the hypocenter and destroyed in the atomic bombing. No photos showing the inside of the temple had previously been known to exist. The photos have been kept carefully by Mutsuo Nikamoto, 92, a resident of Iwakuni City, along with his own memories of the times he stayed overnight at the temple.

One of the photos shows 44 adolescent boys sitting at tables lined up in the temple’s main hall, putting their hands together before a meal. They were new employees at the Hiroshima Railway Bureau of the Japan Ministry of Railways who were undergoing training. Mr. Nikamoto was 15 years old at the time. The trainees studied railway work for about two months at the temple’s main hall and annex, facilities that the bureau had rented, in the former Nakajima Honmachi area. “I still remember that we slept side by side in the huge main hall,” Mr. Nikamoto said. The photos were taken in May 1942 to commemorate completion of the training.

Jisenji Temple was located about 200 meters from the hypocenter. On August 6, 1945, the temple was reduced to ashes in the atomic bombing. The temple’s chief priest, Senrei Kajiyama, then 49, along with his wife Hisae and three other members of the family were killed on the grounds of the temple. Those grounds became a makeshift crematory right after the bombing, where countless corpses were cremated and the ashes collected.

The chief priest’s oldest son, Senjun (who died in 2019 at the age of 96), built a barracks on the ruined site in an aim to restore the temple when he was demobilized after the war. However, the temple was moved to a different location in the city center to make way for the construction of Peace Memorial Park. In 1955, the Atomic Bomb Memorial Mound was created on the original site of the temple. In 1973, Jisenji Temple was relocated once again to Eba Nihonmatsu (Naka Ward).

Neither the Hiroshima Peace Memorial Museum nor the Hiroshima Municipal Archives possesses any photos of the inside of the main hall before the atomic bombing. Kenji, 69, the current temple chief priest who succeeded his father Senjun, has one photo, which only partially shows the hall’s external appearance. “I had heard that the hall was big. I can see details of the structure from the photos,” said Mr. Kajiyama. “If only my father could have seen them while he was alive.”

After undergoing training, Mr. Nikamoto worked at the Hiroshima Railway Bureau until he was assigned to the Kure train station in December 1943. In July 1945, the city of Kure suffered an air raid. On August 6, he was on the grounds of the Kure train station when, he explained, “The inside of the building suddenly lit up, followed by the bomb’s blast a few seconds later.” He was exposed to radiation when he returned to Hiroshima City to search for his father the next day.

Recalling the memories of the air raid and the atomic bombing, Mr. Nikamoto stressed, “War is so cruel and sad. We must not engage in war ever again.” In August this year, he donated two photos to Jisenji Temple, the other of which was a group photograph of Senrei Kajiyama and the young trainees around him taken on the temple grounds.