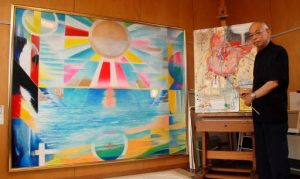 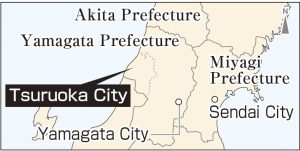 
90-year-old resolves to convey A-bomb experiences with paintbrush
The canvas is almost as high as a person is tall. The abstract sun and sea depicted in the oil painting shine with warmth and calm.

Tsuneki Miura, 90, chair of the Tsuruoka Survivors’ Association in the city of Tsuruoka, Yamagata Prefecture, said, “I want to continue calling for a peaceful world without nuclear weapons” through the paintings, in addition to sharing his A-bomb experiences with the public. While pursuing work with the association, he has worked on a series of 43 paintings called Genbaku no Keisho (Image of the Atomic Bomb) over a period of about 60 years. Meanwhile, the number of association members has fallen to only three due to aging of the membership.

Mr. Miura, born in Tokyo, moved to the town of Minami Senda-machi in the city of Hiroshima when he was around five years old, after his father, Motokichi, was transferred there. At the time of the atomic bombing, he was a second-year student at Koryo Junior High School, under the prewar education system, in the town of Ujina-cho. He was mobilized to help carry goods and other items from buildings that had been demolished to create fire lanes.

Mr. Miura was riding a large truck with several classmates headed north, leaving the city and passing by Yokogawa Station. “There were a flash of light and a roar, and when I looked back at the city, a rising mushroom cloud was sweeping away thin clouds in the summer sky,” he said.

The truck turned back to the city. Wreckage blocked their way, so Mr. Miura got off and walked to his home, about four kilometers on the path ahead. Along the way, he passed by people who had turned black from their burned clothing. People begged him for water, but he told them he did not have any. “If only I could have given them, at the very least, a sip of water. I still regret that,” he said as he closed his eyes.

Back then, one of his brothers was a first-year student at the Hiroshima Prefectural Hiroshima Commercial School (now Hiroshima Prefectural Hiroshima Commercial High School), and the other was a fifth grader at Senda National School who had evacuated with other school children to a rural area for their safety. His father and his mother, alongside his two brothers, miraculously suffered no injuries. On August 15, when Emperor Hirohito’s broadcast announced the end of the World War II, they moved to the city of Tsuruoka, his parents’ hometown.

Mr. Miura was fond of painting since he was a child. He continued to paint even after he advanced in the school system and began work for a local bank. “I stood in front of a canvas numerous times to paint my A-bomb experience, but the circumstances were too cruel for me to describe,” he said.

After the war, modern art came into fashion, and he thought he might be able to create abstract paintings. In this way, in 1961, he created the first in a series of paintings titled Genbaku no Keisho, when he was 31 years old. He painted swirling black smoke and red flames based on a theme of destruction.

In 1995, the year he donated the first of the paintings to his alma mater Koryo High School, he obtained an Atomic Bomb Survivor’s Certificate based on his exposure to residual radiation when he entered the city shortly after the bombing. The following year, he joined an A-bomb survivors’ association in Tsuruoka City, where he lived. The association had 18 members. He also resumed his creation of the series of paintings. The theme of his artwork gradually changed from destruction of the A-bombed city of Hiroshima to peace as represented by nature such as Japan’s Plains of Shonai and the sprawling coast of the Sea of Japan.

The pace of the change was accelerated after then U.S. President Barack Obama visited Hiroshima in 2016 and Pope Francis in 2019. Mr. Miura shed tears when he saw Mr. Obama exchange an embrace with an A-bomb survivor in Hiroshima Peace Memorial Park, located in the city’s Naka Ward. “Mr. Obama offered no words of apology, but he could have apologized in his heart, right?”

Mr. Miura decided to convey not only the threat of nuclear weapons but also the beauty of peace. In June, he completed the 43rd painting in the series, in the corner of which he painted a white cross in celebration of Pope Francis’ visit to Hiroshima.

In the past few years, an A-bomb survivors’ group in Yamagata Prefecture that had united several organizations for A-bomb survivors in the prefecture ultimately had to disband, and thus the Tsuruoka City association became the sole survivors’ group in Yamagata Prefecture. Nevertheless, there are no plans for second-generation A-bomb survivors to take over the association. Regular meetings have not been held for a long time. Mr. Miura was prepared for anything. “We are the last people to carry out activities for the association and share our experiences.” One of their main activities was to urge, two years ago, the Tsuruoka City Assembly to apply pressure to the Japanese government to ratify the Treaty on the Prohibition of Nuclear Weapons, but to no avail.

Still, he hopes that young people will continue to express messages of peace to the world as proof that A-bomb survivors live in Yamagata Prefecture. When he is invited to speak about his experiences to local junior high school peace studies, he continues to convey the catastrophe using newspaper-sized, hand-painted illustrations.

Mr. Miura has held solo exhibits of the series of paintings in his hometown and the neighboring city of Sakata, and he plans to hold the next one when he turns 99. As long as he is alive, he will continue to share his A-bomb experiences through his paintings, based on his desire for a nuclear-free world.