Nuclear ban treaty to enter into force, Part 2: Next goal is to convince nations dependent on the concept of nuclear deterrence 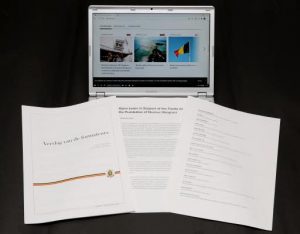 
Some countries supporting TPNW release policies and statements in support of treaty
Next year in January, the Treaty on the Prohibition of Nuclear Weapons (TPNW) will enter into force, representing a historic milestone for sure, yet not a final goal by any means. How can the nuclear weapon states and other countries that rely on the nuclear umbrella for protection be drawn into the treaty? Efforts that look beyond the treaty’s effectuation have already begun.

In late September, 56 former leaders and other politicians from 22 nations—including North Atlantic Treaty Organization (NATO) European member states, Japan, and South Korea—issued an open letter stating, “Our countries should reject any role for nuclear weapons in our defense. By claiming protection from nuclear weapons, we are promoting the dangerous and misguided belief that nuclear weapons enhance security.”

Former policymakers from nations such as Japan that rely on the U.S. nuclear umbrella have called on their countries to change the policies for which they had once advocated. The letter was formulated by leadership of the International Campaign to Abolish Nuclear Weapons (ICAN), the non-governmental organization (NGO) awarded the Nobel Peace Prize in 2017.

Daniel Högsta, 33, ICAN’s campaign coordinator, mentioned, “Already with Belgium and other NATO and nuclear umbrella states, we are seeing an increasing pressure on them to participate in the TPNW process and, ultimately, to join.” His words revealed his desire to first bring on board countries dependent on nuclear deterrence, as it has been very difficult to peel away nuclear powers regarding this issue.

In fact, a new movement has occurred. The center-left administration of the government of Belgium, which was newly established on October 1, announced a pro-TPNW policy, stating the administration would explore how the treaty could provide new impetus to multilateral nuclear disarmament.

With NATO’s headquarters within its borders, Belgium has played a central role among nations that depend on nuclear arms by, for example, deploying U.S. tactical nuclear weapons on its air force bases. According to a public survey conducted there in 2019, however, 64 percent of Belgian citizens supported their country’s participation in the TPNW treaty. Belgium’s change in attitude caused more than a little shock to the international community, and ICAN welcomed the shift. Nevertheless, uncertainties remain as to whether Belgium will actually move forward to ratify the treaty.

Hiroyuki Nagayama, 56, professor at the graduate school of Hiroshima University, said, “Even if public opinion that characterizes nuclear weapons as inhumane gains prominence, the treaty won’t become a strong enough power to convince nuclear powers to proceed with nuclear disarmament negotiations.” In the United States, Donald Trump, the sitting president who has pursued a policy of nuclear expansion, is reported to face a stiff challenge in the upcoming presidential election in November. However, “Whoever assumes the presidency, the foundation of U.S. nuclear policy will basically remain unchanged,” said Mr. Nagayama decisively.

Nuclear weapon states are putting up resistance to the TPNW, with such statements as, “The treaty only deepens conflicts between nuclear and non-nuclear nations.” The United States, for its part, conducted the reckless act of urging several nations to withdraw their TPNW ratification. Japan continues to turn its back on the treaty.

In June, Setsuko Thurlow, 88, an A-bomb survivor living in Canada who represented ICAN at the Nobel Peace Prize awards ceremony, wrote letters to each of the leaders of 197 nations and regions in the world, requesting that they join the treaty. “Through interpersonal communication, I want such leaders to internalize the desire of those who survived the atomic bombings to never allow such a tragedy to happen again,” said Ms. Thurlow.

In this milestone year marking the 75th anniversary of the atomic bombings amid the coronavirus pandemic, the elderly A-bomb survivor raised her voice with all her might. She reported that some nations had given positive feedback to her request. She eagerly awaits responses from Japan and the nuclear powers.