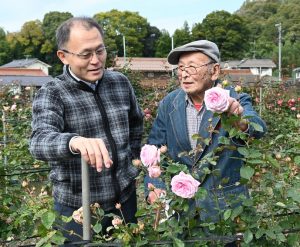 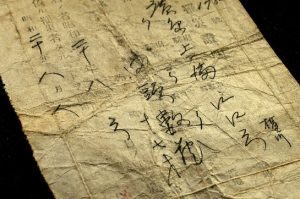 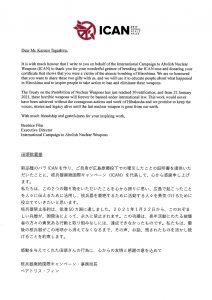 Kazuzo Tagashira, 91, an A-bomb survivor and rose breeder living in Hatsukaichi City, has donated his A-bomb victim’s certificate, which he had carefully cared for over a period of 75 years, to the headquarters of the International Campaign to Abolish Nuclear Weapons (ICAN), a nongovernmental organization (NGO) based in Geneva, Switzerland. The donation represents Mr. Tagashira’s desire for the certificate to help continue to convey worldwide the misery of that day in Hiroshima.

In the evening of August 6, 1945, the day of the atomic bombing, Mr. Tagashira entered Hiroshima’s city limits and managed to arrive at his home in the area of Kamitenma-cho (now part of Nishi Ward), after passing near the hypocenter while being hindered by fires here and there. Two days later, he was issued an A-bomb victim’s certificate on which was indicated his address and name. As evidence that he had wandered around the annihilated city, he stored the small, palm-sized piece of paper in a safe-deposit box.

In January 2019, Mr. Tagashira named a new rose variety he had developed “ICAN,” because he was impressed with the group’s efforts to help contribute to establishment of the Treaty on the Prohibition of Nuclear Weapons (TPNW). Since then, he has deepened his connections with the ICAN organization. Coming up with the idea of donating his A-bomb victim’s certificate to the group, Mr. Tagashira presented the piece of paper to Akira Kawasaki, 51, a member of ICAN’s international steering committee. The certificate is now kept in storage by the Peace Boat organization, an NGO based in Tokyo for which Mr. Kawasaki serves as co-chair. Mr. Kawasaki plans to deliver the certificate to ICAN’s headquarters in Switzerland once the COVID-19 pandemic is mitigated.

On November 5, Mr. Kawasaki visited Hiroshima Baraen (Hiroshima Rose Garden) to meet Mr. Tagashira, taking with him a letter from Beatrice Fihn, executive director of ICAN, who wrote, “We are so honoured that you want to share these two gifts [i.e., ICAN rose and A-bomb victim’s certificate] with us.” Mr. Kawasaki made the visit with the report that the TPNW would enter into force in January, next year, and to tour the rose garden where ICAN roses were planted.

During the visit, Mr. Tagashira described what he had experienced at the time of the atomic bombing, such as his inability to do anything to assist the wounded who were calling out for help, as well as his sadness at learning that his younger brother had been killed in the bombing. He said, “I would like others to understand the A-bomb survivors’ feelings.” Mr. Kawasaki made a promise to Mr. Tagashira, saying, “We will make sure your certificate is exhibited throughout the world with photo of your rose, to ensure that viewers have a better firsthand understanding about what happened in Hiroshima.”