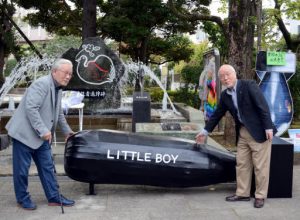 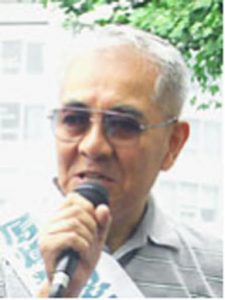 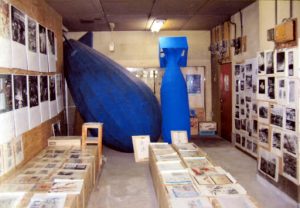 “I have to continue communicating the destructive power of nuclear weapons and the history of their use against human beings.” With such tenacity, an A-bomb survivor in Tokyo made a full-scale replica of “Little Boy,” the atomic bomb dropped on Hiroshima. Possession of the replica recently changed hands from a peace organization in Sumida City in Tokyo to Shinkokai, an A-bomb survivor organization located in the city’s Edogawa City.

First proposing the idea of creating the replica was the late Yoshinao Fukuchi, the A-bomb survivor in Tokyo. He experienced the atomic bombing at the age of 14 at his home in the town of Kokudaiji-machi in Hiroshima City, located about one kilometer from the hypocenter. He moved to Tokyo three years later. He suffered from a variety of ailments and was in and out of the hospital with high fevers and stomachaches of unknown causes. Mr. Fukuchi applied for A-bomb disease certification in 2001, because he had learned of one A-bomb survivor suffering from hepatitis C, as he did, who was engaged in a court battle to seek A-bomb-related disease recognition. After his application was rejected, he joined a class-action lawsuit related to A-bomb disease certification.

Around that time, Mr. Fukuchi began to share his A-bomb experience with others. He rented a vacant retail space next to his general store, which he operated in a housing complex area in Sumida City, and opened an exhibit space for photographs and paintings conveying the reality of the atomic bombings. He also came up with the idea of displaying a full-scale replica of the atomic bomb that was dropped by the United States on Hiroshima. He completed the replica with cooperation from the late Shichiro Nozaki, an A-bomb survivor who owned a welding business in Tokyo’s Sumida City.

The replica measures about 0.7 meter in diameter and three meters in length. Sheets of paper were first pasted together on the replica’s brass frame. Originally blue, the replica was painted black by Mr. Fukuchi when he later worked on restoration. Students at nearby elementary and junior high schools would often visit the exhibit space to look at the replica as part of their school curriculum. In such questions as “Did the city vanish when this was dropped?” the children seemed to sense the destructive power of the atomic bomb. Mr. Fukuchi also created a replica of “Fat Man,” the atomic bomb dropped on Nagasaki.

Mr. Fukuchi passed away from liver cancer in 2005. Although the replicas were utilized by a peace organization in Sumida City, the group could no longer secure a place for their storage. Members of the organization offered to hand over the replica of Little Boy to the Shinkokai organization. It was determined at that time that the replica would be stored in facilities in Edogawa City.

The ceremony to transfer the replica was held in Edogawa City on November 1. The replica was received by about 60 members of Shinkokai, including Hiroshi Yamamoto, 82, chairperson of the organization and an older brother of Koji Yamamoto, former manager of the professional Hiroshima Toyo Carp baseball team. Mr. Yamamoto vowed, “We will make use of this replica for many years to come, to make sure that many people have the chance to understand the horror of nuclear weapons.” Takeshi Minato, 77, chairperson of the peace group in Sumida City and chairperson of Sumida Orizurukai, an A-bomb survivors’ organization, said, “We are grateful they agreed to receive both the replica and the wishes of Mr. Fukuchi.”