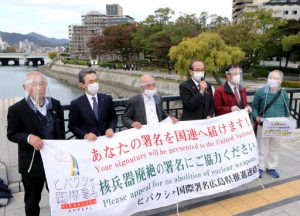 On November 24, the Hiroshima prefectural chapter of the Hibakusha Appeal network, consisting of seven Hiroshima A-bomb survivors’ groups, collected signatures in support of nuclear abolition on the Motoyasu Bridge, located in Hiroshima’s Naka Ward. The event was to be the last signature-drive effort to take place in Hiroshima because the signatures collected thus far nationwide are to be compiled at the end of the year. Aiming to increase the call urging nuclear weapon states and the Japanese government to participate in the Treaty on the Prohibition of Nuclear Weapons (TPNW), 50 people gathered to encourage citizens and tourists in the city to cooperate by signing their signatures for the drive.

Holding up a messaged banner were Toshiyuki Mimaki, 78, vice chair of the Hiroshima Prefectural Confederation of A-bomb Sufferers Organizations (Hiroshima Prefectural Hidankyo, chaired by Sunao Tsuboi), Kunihiko Sakuma, 76, chair of the other Hiroshima Prefectural Hidankyo, and other group members. Referring to the TPNW’s entry into force on January 22 next year, Mr. Mimaki said, “Our effort is bearing fruit. Let’s take action based on our hopes for the elimination of nuclear weapons.” Hiroshima Mayor Kazumi Matsui also visited the signature-drive site and conveyed his belief in the importance of creating conditions based on which the treaty can be effective.

Against the backdrop of the coronavirus pandemic, the street-signature drive was held for the first time in about a year. As countermeasures against spread of the virus, participants wore face shields and people providing their names were asked to take home with them the ballpoint pens they used to sign signatures. Kosaku Yamaguchi, 83, who had traveled to the Hiroshima Peace Memorial Museum from Hirakata City, Osaka, said as he signed his signature, “It’s strange that Japan, the only nation attacked by nuclear weapons won’t join the treaty banning nuclear weapons.”

The Hiroshima prefectural chapter of Hibakusha Appeal was established in 2018, with the aim of having A-bomb survivors’ groups work together to collect international signatures in the prefecture with which to press all countries throughout the world to ban and abolish nuclear weapons. By September 18 this year, the campaign had collected 819,450 signatures. The signatures collected throughout Japan will be compiled by the nationwide Hibakusha Appeal network and presented to the United Nations.