Event held to carry on pope’s wishes one year after his visit to Hiroshima, renew anti-nuclear vow 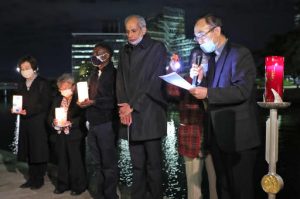 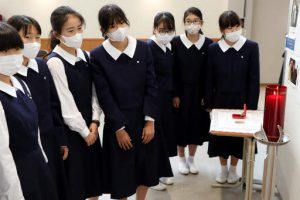 On November 24, the first anniversary of Pope Francis’ visit to Hiroshima Peace Memorial Park (in the city’s Naka Ward), an event was held in Hiroshima with the aim of carrying on and communicating the pope’s message about the inhumanity of nuclear weapons. The event—attended by A-bomb survivors, citizens, and those in the church who had welcomed the pope at that time—renewed their vow to abolish the weapons.

The full text of the peace message delivered by the pontiff last year, including the phrasing “the use of atomic energy for purposes of war is immoral,” was placed in front of the assembly hall at Notre Dame SEISHIN Junior & Senior High School (Nishi Ward), where around 120 students from the school had participated as volunteers in a gathering on the day of the pope’s visit.

Also put on display were a candleholder for a candle the pope had lit and a medal presented to people involved, both of which are the property of the Hiroshima City government. Momoka Maeda, 16, a second-year student at SEISHIN High School and member of the “P-step” peace club who served as a volunteer at the time of the pope’s visit, stated firmly, “I recalled that day when people around the world listened attentively to the pope’s message. With his words in mind, we will continue doing what we can for the cause of peace.”

At Peace Memorial Park, a total of about 40 people, including Catholic adherents and members of nonprofit organizations, gathered for a commemorative event, offering a silent prayer before the Cenotaph for the A-bomb Victims. The group then lit candles with flames from the Flame of Peace at the Shinsui Terrace across from the Atomic Bomb Dome and chanted in unison, “We wish for the peace of all countries; we pray for the peace of all countries.”

The Catholic Hiroshima Diocese’s Bishop Mitsuru Shirahama, 58, read an excerpt from the pope’s message and offered a prayer. “May the leaders of each nation build peace through dialogue with dignity,” he said.

On November 24 last year, the pontiff visited the A-bombed cities of Hiroshima and Nagasaki, the first visit to those locations for a pope in 38 years. In his 14-minute speech delivered in Hiroshima, he unequivocally renounced the use and possession of nuclear weapons, calling for the need to more widely communicate the memory of the tragedy of Hiroshima, on which an atomic bomb was used for the first time in human history.

Bishop Shirahama said, “Carrying on his wishes, we hope to continue the event next year and beyond, expanding the circle to the next generations.”