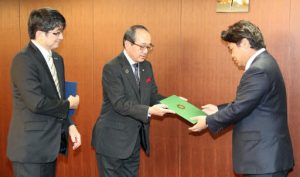 
Mayors stress significance of Japan’s active involvement in TPNW
Following the determination that the Treaty on the Prohibition of Nuclear Weapons (TPNW) will take effect on January 22, 2021, Hiroshima Mayor Kazumi Matsui and Nagasaki Mayor Tomihisa Taue paid visits on November 20 to executive members of the national ruling and opposition parties as well as to the Ministry of Foreign Affairs to request that the Japanese government sign and ratify the treaty. The mayors called on the Japanese government, presently a nation with observer status, to participate in the meeting of the State Parties, to be held within a year after the treaty’s effectuation, and exercise leadership in nuclear disarmament as a “bridge” between nuclear weapon states and non-nuclear weapon states.

The two mayors handed written requests to State Minister for Foreign Affairs Eiichiro Washio at the Japan Ministry of Foreign Affairs. Mr. Matsui stressed the significance of Japan’s active involvement in the treaty. “Once it enters into force, one challenge will be ensuring that the treaty is effective.” Mr. Taue called for the meeting of the State Parties to be held in the A-bombed cities. “The treaty represents a ray of hope for A-bomb survivors. I hope the Japanese government joins the discussions as the only nation to have suffered an atomic bombing in war time,” said Mr. Taue.

The mayors also requested that the Japanese government push for U.S. president-elect Joe Biden to visit the A-bombed cities.

The Japanese government is not a party to the TPNW out of consideration for the United States, which provides Japan protection under its “nuclear umbrella.” Japan’s Prime Minister Yoshihide Suga presented his view in a response at an extraordinary session of the Diet that holding the meeting of the State Parties in Hiroshima or Nagasaki was “inappropriate.” Although State Minister Washio said that the Japanese government “will consider the request seriously,” he maintained a cautious stance regarding Japan’s participation in the treaty and did not mention specific measures.

The two mayors also met with Minoru Terada, a Liberal Democratic Party member representing Hiroshima electoral district No. 5 and head of a parliamentarians’ association to promote relief to A-bomb survivors; Natsuo Yamaguchi, leader of Komeito; Katsuya Okada, a Constitutional Democratic Party member and chair of an association of Diet members seeking a world without nuclear weapons; and Shinji Morimoto, acting secretary general of the association and an Upper House member from Hiroshima. Mr. Matsui and Mr. Taue requested the lawmakers to ensure active discussions in the Diet toward Japan’s participation in the treaty.

The TPNW, which comprehensively bans nuclear weapons, from their development to use, was adopted at the United Nations in July 2017. The number of nations and regions that have ratified the treaty reached 50 on October 24 this year, the number necessary for the treaty to take effect.