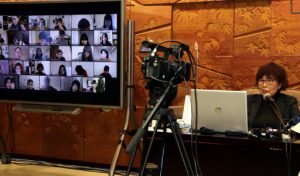 The Hiroshima Junior International Forum, at which high school students from the prefecture of Hiroshima and overseas discuss international peace and nuclear abolition, began on November 29. Thirty participants from 14 countries including Japan participated in the forum online. Three sessions are scheduled be held until December 13, the date on which the participants will draw up the “Hiroshima Declaration,” a message calling for the realization of peace.

On the first day of the forum, participants listened to a testimony by Keiko Ogura, 83, a resident of Naka Ward who experienced the bombing in the Ushita-cho area (now part of Higashi Ward), located 2.4 kilometers from the hypocenter. She relayed her A-bombing experience in English.

Speaking about the situation at that time, Ms. Ogura explained how her father had burned to ash the corpses of victims in a nearby park almost every day in the aftermath of the atomic bombing. Asked by one participant what should be done for the elimination of nuclear weapons, she responded, “Learn the facts, exchange opinions across national borders, and begin by doing what you can.”

The international forum is organized by the Hiroshima Prefecture government, and this year’s is the fifth such event. With this year marking the 75th anniversary of the atomic bombings, the prefectural government had planned to hold the forum mainly in the city of Hiroshima in August earlier this year, inviting participants from all 193 member states of the United Nations. However, due to the COVID-19 pandemic, the meeting had to be delayed and reduced in scale. This is the first of the forums to be held online.

Participants are expected to discuss reconstruction and peace building in groups on December 6 and release the Hiroshima Declaration on December 13.