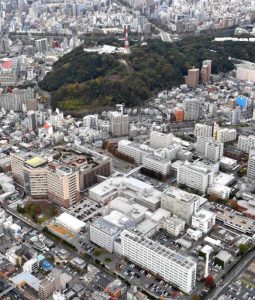 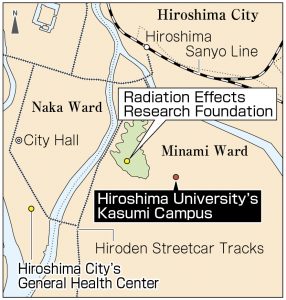 On November 26, it was learned that Hiroshima University’s Kasumi campus had surfaced as a candidate site for relocation of the Radiation Effects Research Foundation (RERF), located in Hiroshima’s Minami Ward and jointly operated by the governments of Japan and the United States. Requesting the organization be relocated to a new location as soon as possible, the Hiroshima City government previously suggested that RERF relocate to the city’s General Health Center in Naka Ward, although that proposal has never been finalized. RERF and Hiroshima University alike appear to consider the potential relocation to the Kasumi campus beneficial in terms of enhancing research collaboration.

The university’s Kasumi campus is about 600 meters southeast of the present location of RERF in Hijiyama Park. The campus is home to Hiroshima University Hospital and the Research Institute for Radiation Biology and Medicine, which is one of the largest university institutes in the field of radiation biomedical science in Japan.

The campus appears to have become a candidate site for the relocation because some held the opinion that such a move would foster closer collaboration in terms of radiation research and because the campus’ close proximity to RERF would ensure flexible progress on the relocation process.

On the other hand, relocation to Hiroshima City’s General Health Center has been under consideration since the plan was first proposed in 2016. After Japan’s national government announced it would be hard to build new facilities due to related costs, Hiroshima City proposed that the institute be relocated to the General Health Center. The national government appropriated the costs necessary for the conduct of a survey in fiscal 2018 in which specialists examined whether the health center site fulfilled the conditions necessary to accommodate RERF.

The survey report compiled in fiscal 2016 concluded that moving RERF to the General Health Center was technically possible and that the total costs would amount to around 6.1 billion yen. The city government anticipated that the plan would be considered seriously, but several concerns about the plan became apparent. Some considered it a problem that the site’s total floor area was smaller than the national government’s suggestion. Others thought that the cost-reduction effects would be insignificant, since the health center would need to be renovated for the installation of special equipment. In a web meeting held in June this year and attended by councilors from both Japan and the United States, the different parties agreed that discussions would continue on the relocation issue.

Besides the General Health Center, no other candidate facilities had been suggested, and if RERF were to relocate to the Kasumi campus, construction of new facilities might be considered. Since Japan’s national government has indicated that building a new facility would be difficult, one key will be whether it and the U.S. government, which jointly manage RERF, decide to bear the expenses involved.

The city government has long viewed as a problem how the Atomic Bomb Casualty Commission (ABCC), the forerunner of RERF, moved to Hijiyama Park in 1950. The government considered that the relocation was pushed forward under Japan’s occupation after World War II. A-bomb survivors’ groups in Hiroshima have also demanded that RERF be relocated to a different site. The issue was one of the greatest concerns related to the A-bombed city’s redevelopment since after the war. The city government has announced its intention to reorganize the Hijiyama Park area into the “Peace Hill,” based on the assumption that RERF will be relocated.

Radiation Effects Research Foundation (RERF)
With the aim of examining the long-term health effects of exposure to radiation from the atomic bombings, the Atomic Bomb Casualty Commission (ABCC), RERF’s predecessor organization, was founded in 1947. Later, based in Hiroshima and Nagasaki, ABCC began a study of about 120,000 A-bomb survivors. In 1975, ABCC was reorganized into RERF, which is jointly funded and managed by the governments of Japan and the United States. RERF has studied associations between A-bomb survivors’ radiation exposures at the time of the atomic bombings and subsequent cancer incidence and mortality rates. The research organization also continues studies of second-generation A-bomb survivors and in-utero survivors.