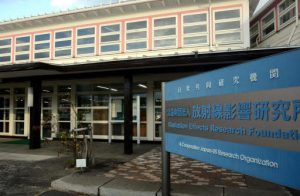 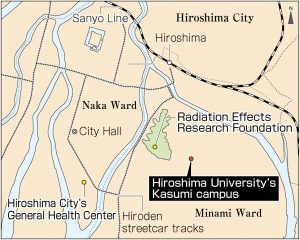 The Radiation Effects Research Foundation (RERF) officially announced on December 3 that Hiroshima University’s Kasumi campus, which is located in Minami Ward, had become a candidate site for the relocation of the facility located in Hijiyama Hill Park in Minami Ward. The city’s General Health Center located in Naka Ward has also been a candidate site. As for the Kasumi campus, the benefits are that it would make joint research between RERF and Hiroshima University easier. The two candidate sites will be compared, and the organization’s council will make the final decision in June next year. RERF’s operation is jointly financed by the governments of Japan and the United States.

Inclusion of the Kasumi campus was announced in a closed-door meeting of the RERF’s local liaison council, from which RERF seeks advice about its research and operations.

After the meeting, Ohtsura Niwa, chairman of RERF, held a news conference and said the Kasumi campus came up as a candidate during RERF council’s unofficial meeting held in January this year. They stressed the importance of collaboration with local research institutions, since RERF is expected to conduct research at the molecular level, in accordance with technological advancement, in addition to traditional epidemiological studies of radiation’s influence on people’s health.

The Kasumi campus is only about 600 meters southeast of RERF, and is home to Hiroshima University Hospital and the Research Institute for Radiation Biology and Medicine, one of the largest university institutes in the field of radiation biomedical science in Japan.

As for the plan to relocate RERF to the city’s General Health Center proposed by the city government in 2016, an investigation by specialists found that the plan would be technically possible. As to how the Kasumi campus plan emerged, Mr. Niwa said, “The idea came up when we held a constructive discussion about what the relocation will bring about in making our studies go smoothly.”

Mitsuo Ochi, president of Hiroshima University, also attended the press conference. He stressed that the university would also benefit, saying that they will be “great partners in collaborative research.” Since RERF’s relocation to the Kasumi campus will involve building a new facility, they will estimate the construction costs. RERF will decide the candidate site in its council meeting next year, and ask Japanese and the U.S. governments to take budgetary measures.

RERF’s site area is about 22,700 square meters. The city government has been claiming that the Atomic Bomb Casualty Commission (ABCC), the forerunner of RERF, was forcibly moved to its present location in 1950 when Japan was under the occupation of allied forces. The city government has announced its intention to reorganize the Hijiyama Hill Park area into the “Hill for Peace,” on the assumption that RERF will be relocated.