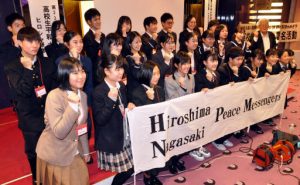 On December 5, this fiscal year’s High School Peace Ambassadors attended a ceremony marking the formation of the peace ambassador team at a hotel in Hiroshima’s Higashi Ward. Due to the coronavirus pandemic, the ceremony was held six months later than usual. However, 28 such ambassadors from around Japan were able to participate in the ceremony, with a view to enhancing unity in this 75th year after the atomic bombings.

In his speech, Ken Kobayakawa, one of the joint representatives of the High School Peace Ambassador Dispatch Committee, touched on the Treaty on the Prohibition of Nuclear Weapons, which is scheduled to enter into force in January of next year. “That was made possible by the wishes of A-bomb survivors. The world faces extreme difficulties today, but we need to make progress together with belief in making persistent and consistent efforts.”

Hiroshi Harada, 81, former director of the Hiroshima Peace Memorial Museum and a resident of Asaminami Ward, gave his account of the atomic bombing at the gathering. He experienced the atomic bombing at the Hiroshima train station when he was six years old. Mr. Harada said he had to walk over corpses as he fled the area. “I hope you all consider my experience as your own and convey it to the world,” he said.

Typically, peace ambassadors deliver signatures calling for the elimination of nuclear weapons to the United Nations Office at Geneva, in Switzerland. However, this year’s peace ambassadors were unable to travel abroad earlier this summer because of COVID-19. Fears also arose that the team-formation ceremony, which is usually held in June, would also have to be canceled. But the gathering was successfully held since there was a strong desire among all involved to be part of such a ceremony. The ambassadors will visit Hiroshima Peace Memorial Park, located in the city’s Naka Ward, on December 6.

Miyu Inaba, 17, a second-year high school student from Sapporo, Hokkaido, said, “It is reassuring to be able to share my thoughts with people of my generation. I hope to learn more about the tragedy of the atomic bombing than I can learn by simply reading historical materials.” Yurina Yunoki, 16, a second-year student at the local high school attached to Hiroshima University, said, “We will work hard to carry on the wishes of the A-bomb survivors.”