At screening of “The Vow from Hiroshima,” Setsuko Thurlow tells audience in Hiroshima her promise that classmate deaths would not be for nothing 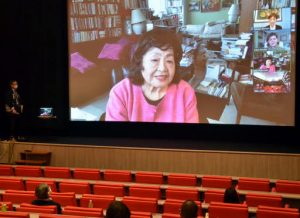 On the night of November 25, the screening of a documentary film was held in Hiroshima’s Naka Ward. The movie documents the life and work of Setsuko Thurlow, 88, an A-bomb survivor living in Canada who has devoted half her life to the anti-nuclear movement. Ms. Thurlow and Mitchie Takeuchi, 65, the producer of the movie who was raised in Hiroshima’s Minami Ward and now lives in New York City, delivered greetings to the audience online after the screening while their images were superimposed on the movie screen and explained about the documentary’s message.

The 82-minute film’s title is “The Vow from Hiroshima.” The documentary depicts the life of Ms. Thurlow, who experienced the atomic bombing when she was 13 years old and persisted in calling for the elimination of nuclear weapons. Through filming over the past four years, the movie captures such scenes as Ms. Thurlow meeting with young people in the United States and sharing with them her A-bombing experience, being involved in efforts to help realize the Treaty on the Prohibition of Nuclear Weapons (TPNW), and witnessing adoption of the treaty at the United Nations.

The producer, Ms. Takeuchi, makes her own appearance in the movie. The documentary also features the process by which she was able to reexamine her own identity as a second-generation A-bomb survivor.

The screening venue was connected to sites in Canada and the United States through an online web-conferencing system. Ms. Thurlow recalled the day she lost her classmates at Hiroshima Jogakuin Girls’ High School (now Hiroshima Jogakuin Junior and Senior High School) and explained the source of the movie’s title. “I vowed I would never let their deaths be for nothing,” she explained. Ms. Thurlow also called on people in Japan to strongly criticize the Japanese national government, which persists in its opposition to the TPNW.

For her part, Ms. Takeuchi introduced the documentary as a story of people who survived both the war and the atomic bombing. Susan Strickler, the director of the movie, expressed her expectation that the film would be released in Hiroshima and overseas. She said she would like young people in particular to watch the film, as they carry on their shoulders the future of the world.

In conjunction with the date of the TPNW’s entry into force, on January 22 next year, the movie will be released at the Hatchoza movie theater in Naka Ward, Hiroshima.