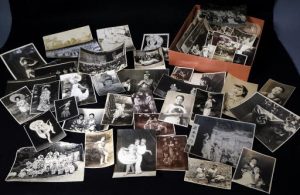 On December 6, it was learned that Hadabesso, a traditional Japanese restaurant located in the Funairi-cho area, in Hiroshima’s Naka Ward, has held on to about 200 photographs of the Hadabesso Girls Revue, a dance troupe the restaurant managed before World War II. The restaurant celebrated its 120th anniversary this year. The photos represent a precious historical resource and convey a sense of the entertainment industry and customs in Hiroshima before the city was annihilated in the atomic bombing. Many of the photos appear not to have been shown to the public to date.

Katsuko Matsunaga (née Kagawa), a former member of the Hadabesso dance troupe, donated the photos to the restaurant in 2015. Ms. Matsunaga joined the revue during the 1930s and died three years ago. Some of the photos she donated show the company performing onstage, where the young women danced in gorgeous costumes, as well as numerous revue members in casual poses. Also included is a photograph of the troupe’s performance commemorating the 1936 conclusion of the German-Japan Anti-Comintern Pact, a joint anti-communist agreement.

In 1918, the late Kenjiro Hada (1876–1945), founder of the Hadabesso restaurant, began the dance troupe as the Hada Revue, modeled on other groups such as the Takarazuka Girls Revue. The dance company toured other regions such as Tokyo, the Kansai area, former Manchuria (in the northeast part of China), and Taiwan, until the troupe was disbanded in 1941, just prior to the start of the Pacific theater of World War II fought between Japan and the United States.

The Hadabesso restaurant was reduced to ashes in the atomic bombing by the U.S. military, but it continues serving customers even today, since the time it was rebuilt after the war.

Yayoi Maeno, chief curator of the Hiroshima City Museum of History and Traditional Crafts, said, “As most materials related to the Hada Revue company’s performances were destroyed by fire, this is the first time I have seen such a comprehensive collection of photos. They are extremely valuable because the photos give us an idea of what entertainment was like in those days.” Some of the photos will be displayed at a special exhibit scheduled to be held at the museum in the spring of next year.