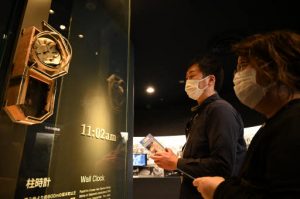 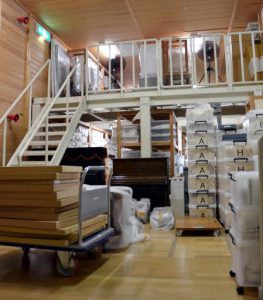 The Hiroshima Peace Memorial Museum and Nagasaki Atomic Bomb Museum store and exhibit actual A-bombed objects into which are etched the ferocity of the A-bombs’ thermal rays and blasts. Belongings of A-bomb victims convey to people alive now the untold sorrows of those who perished and the grief of their families. The sense of presence of such items will become much greater in the future, when A-bomb survivors’ voices can no longer be heard directly. Meanwhile, the two museums face challenges regarding their collections, such as deterioration of aged materials and difficulties in securing storage space. In this feature article, the Chugoku Shimbun and the Nishinippon Shimbun join together to look into the current state of the ‘silent witnesses’ of the days of the atomic bombings.

The Hiroshima Peace Memorial Museum, located in the city’s Naka Ward, has a huge collection of items, comprised of 20,000 A-bombed objects such as personal belongings of victims and roof tiles exposed to the A-bomb’s thermal rays, 70,000 photos taken by the U.S. military to record damage from the atomic bombing, and 5,000 A-bomb paintings created by the general public. Each year, the museum asks people to donate belongings related to the atomic bombing such as posters and receives donations from 50-to-70 individuals and organizations, include surviving family members.

Eight curators currently work for the museum. Hiroshi Harada, 81, an A-bomb survivor who served as the museum’s director for four years starting in 1993, looked back at past times and said, “When I was first director, the museum’s structure was insufficient, as no full-time curators worked there.”

In 1995, the museum hired two full-time curators to begin work on the creation of a catalog of the collection and the development of a database for the future. The city consigned administrative operation of the museum to the Hiroshima Peace Culture Foundation, an extra-governmental organization, in 1998. Some were concerned about the outsourcing decision, arguing it could lead to regression of Hiroshima City’s peace-policy promotion. Mr. Harada explained, however, “That move allowed us to allocate staff without being restricted by municipal ordinances.”

One of the challenges the museum struggles with is how to secure enough storage space for the materials in its possession. In 2014, it prepared a fourth storage room, which now has become cramped with things. Hironobu Ochiba, 43, chief curator, said, “I worry about what would happen if we were to receive a large-scale donation.” Since the storage rooms are located underground, measures for protecting the collections from potential damage due to flooding from torrential rains are needed immediately.

According to an ordinance concerning the Hiroshima Peace Memorial Museum, the purposes for establishing the museum are to convey to people from all nations the actual condition of damage wrought by the atomic bombing and to help contribute to realizing elimination of nuclear weapons and lasting world peace. The permanent exhibit in the museum’s main building, which reopened in April 2019 after conclusion of renovations, incorporates actual A-bombed items, such as clothing and school bags of mobilized students who died of the bombing, as its centerpiece. The museum’s policy includes the regular change of such display items. The policy is primarily designed to prevent deterioration of the materials as a result of being put on display, but it also enables the museum to satisfy the wishes of donors, who hope items they donate can be fully utilized, by displaying as many items as possible from the collection, some of which can remain in storage for a long time.

Koji Hosokawa, 92, an A-bomb survivor and resident of Hiroshima’s Naka Ward, lost Yoko Moriwaki, his younger sister who was then 13 years old, in the atomic bombing. In 2018, Mr. Hosokawa donated her belongings, including her school uniform, to the museum. However, after some deliberation, he determined to keep for himself one of the items, which was a diary she had written until August 5, the day before the bombing. Mr. Hosokawa felt that he would feel empty without his sister’s diary.

Mr. Hosokawa wavered between lingering affection for the belongings of his sister and hope that the items would be useful to others through the donation. Along with his enduring efforts to testify to the public about his A-bombing experience, he continued to serve as a Hiroshima Peace Volunteer, a role that involves introducing details of the museum’s exhibits to visitors. “The actual A-bombed materials urge the viewers to consider the devastation of the atomic bombing as something that happened to them,” he said. “Each of the artifacts in particular serves as proof that the victims once lived. The items have a power of persuasion that is different from that of survivors’ testimonies.”

An A-bombed wall clock is stopped at 11:02, the time at which the atomic bomb exploded over Nagasaki. The clock is a representative A-bombed material at the Atomic Bomb Museum in Nagasaki, providing visitors with images of that moment of tragedy. The clock was removed from the museum exhibit in October to create a replica.

Until the very moment of the A-bomb explosion, the clock kept time at a private home in the vicinity of the Sanno Shrine, located about 800 meters from the hypocenter. It was donated to the city in 1949 and displayed at the entrance of the permanent exhibit room as a way to welcome visitors. However, the clock’s metal fittings have deteriorated in the 75 years since the atomic bombing.

This situation is not just limited to the clock. Minako Tsurumoto, 31, the museum’s curator, said, “Victims’ clothes on display have been discolored by exhibit lighting, meaning the original colors at the time of the bombing have been lost.” Ms. Tsurumoto added that such A-bombed materials as a charred lunchbox and a molten glass bottle that were exposed to heat rays and blast from the atomic bombing tended to deteriorate more rapidly.

The urgent issue for the museum, with its collection of about 20,000 A-bombed materials, is development of methods to preserve and utilize the rapidly deteriorating materials. According to Ms. Tsurumoto, to communicate the horror of the atomic bombings to people hundreds of years from now, the Nagasaki City government this year initiated a project to create replicas of A-bombed artifacts. The replica of the A-bombed clock, which is part of the project’s first phase, is expected to be completed in March next year. Until that time, a photograph of the clock will be placed on display instead.

However, the project’s second phase implementation has not yet been decided. The clock replica is projected to cost 3.13 million yen. The city received a subsidy from Japan’s Ministry of Health, Labor and Welfare by defining the purpose of the project as commemorating the war victims, with two-thirds of the subsidy to be spent for replica production. Ichiro Maeda, manager of the Nagasaki City’s department responsible for conveying information about the atomic bombing damage to future generations, said, “This year, we were able to receive more subsidies than usual, as it was the 75th anniversary of the atomic bombing. It’s hard to predict what will happen next year, though.”

It appears hard to say that sorting of the museum’s A-bombed materials is going well.

Information on survey results about how each material was exposed to the atomic bombing will be made available in a database on the museum’s website. However, data on only about 2,800 items have been uploaded on the web to date. Only two curators work full-time, including Ms. Tsurumoto. The curators conduct a joint survey of such materials with the Nagasaki Foundation for the Promotion of Peace, but they are unable pay full attention to each of the 20,000 items.

The predecessor of the museum was called the Nagasaki International Culture Hall, which opened in 1949. Since the storage room at the hall became full and the facility faced increasing numbers of visitors, in 1996 Nagasaki City opened the current Nagasaki Atomic Bomb Museum as a project for commemorating the 50th anniversary of the atomic bombing.

A full-time curator was assigned 12 years after the museum’s opening. Until that time, general city official staff members were responsible for sorting and surveying the materials. Some of the officials were knowledgeable about the historical background of the atomic bombing and the relevant materials, but their knowledge and expertise were not accumulated and passed on to others, because the officials would often be transferred to other departments in the city government after working at the museum for a few years.

According to Yuichi Seirai, 61, the Akutagawa Prize-winning author who worked as director of the museum from 2010 to 2019, “The role of museum will become more and more important in the future.” Meanwhile, Mr. Seirai pointed out that the local government of the 400,000-population city of Nagasaki would be limited in taking responsibility for the preservation work of the museum materials that convey the world’s last A-bomb tragedy to visitors. He added, “The museum can do nothing but ask for cooperation broadly to manage the materials. I think more creativity will be necessary for operating the museum in future.”