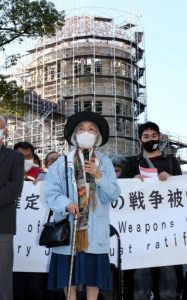 
Passage of 75 years since A-bombing casts shadow
On October 25, the day following the news that 50 nations and regions had ratified the Treaty on the Prohibition of Nuclear Weapons (TPNW), the number necessary for the treaty to enter into force, A-bomb survivors and peace-group members gathered together in front of the A-bomb Dome, located in Hiroshima’s Naka Ward. Some expressed words of joy in response to the news, such as “This is the huge step toward elimination of nuclear weapons” and “We are now entering a crucial stage.” Nevertheless, the steep path ahead until nuclear weapons are abolished and the 75 years needed to reach this point cast their shadows on the celebratory atmosphere.

Sunao Tsuboi, 95, president of the Hiroshima Prefectural Confederation of A- and H-Bomb Sufferers Organizations (Hiroshima Prefectural Hidankyo), did not make an appearance at the gathering. Mr. Tsuboi has been the face of the A-bombed Hiroshima for a long time. In recent years, however, he has made fewer appearances in public due to his advanced age. Instead, on the same day, he celebrated the news by releasing a statement. “I am excited and pleased, but I also have mixed feelings due to the length of time it took us just to get here.” The statement is illustrative of his frustration about the current state of affairs, in which only small steps are taken toward nuclear abolition.

Joy as well as sadness

“I feel joy, but at that same time I am sad,” said Haruko Moritaki, 81, a resident of Saeki Ward and co-chair of the citizen’s group Hiroshima Alliance for Nuclear Weapons Abolition (HANWA), appearing to restrain herself amid the bustle of the event. Ms. Moritaki joined the gathering despite her own illness. But she did not spend a long time openly rejoicing.

Ms. Moritaki has directed anti-nuclear and peace activities from the A-bombed city of Hiroshima and put much effort into promotion of the treaty banning nuclear weapons. She escaped the atomic bombing herself, because she had been evacuated to an area outside Hiroshima. But, she met up with A-bomb survivors who had begun a campaign to eliminate nuclear weapons despite the hardships they faced following the war. Accordingly, she has experienced the deaths of many A-bomb survivors, including of her father Ichiro Moritaki, who once stood at the forefront of the movement.

“Until the last nuclear weapon is abolished, we have to carry with us both the souls of victims who were indiscriminately killed in the atomic bombing as well as the wishes of the survivors who led the way,” said Ms. Moritaki. As time moves ahead, she feels it has become more and more difficult to vividly convey memories of the survivors to others.

Deaths of key survivors reported one after the other

The average age of A-bomb survivors now exceeds 83, with reports of their deaths beings made one after the other. Mikiso Iwasa, who had served as co-chairperson of the Japan Confederation of A- and H-bomb Sufferers Organizations (Nihon Hidankyo), died at the age of 91 this past September. Mr. Iwasa experienced the atomic bombing in Hiroshima when he was a student at Shudo Junior High School and on that day lost his mother and younger sister. He dedicated his life to realizing the goal of the elimination of nuclear weapons but did not live to witness the treaty’s entry into force. Sumiteru Taniguchi, the other co-chairperson of Nihon Hidankyo who had experienced the atomic bombing in Nagasaki, also passed away in August 2017, the month after the TPNW was adopted at the United Nations. He was 88. While alive, Mr. Taniguchi expressed his own anxiety about the future. “What will happen to the world when no A-bomb survivors are alive?” he had said.

The organization is scheduled to put together a new vision plan in the summer of next year, but that plan is not likely to include a specific target year for nuclear abolition. The reason why, Mr. Matsui said, is that, “Our organization will help foster an environment in which a major push can be made for the pursuit of peace.”

Emiko Okada, 83, an A-bomb survivor and resident of Higashi Ward, also appeared at the gathering held in front of the A-bomb Dome. Ms. Okada poured her energies into the Hibakusha Appeal, the signature drive calling on all the nations to join the TPNW. When asked about the fact that 50 nations and regions ratified the TPNW, she expressed consternation and said, “Because nuclear weapons are still not eliminated.”

Since the atomic bombing, she has been waiting for the return of her older sister, who failed to come back on the day of the bombing after leaving home. “From now on, our fate depends on how many people will think seriously about the horrors of the atomic bombing, which killed both souls and lives, and act to realize the elimination of nuclear arsenals.” Not much time remains to directly fulfill such hopes and dreams of A-bomb survivors.