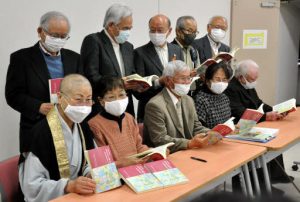 On December 15, a national association with a membership of 82 A-bomb survivors who experienced the atomic bombing while in their mother’s womb, also known as in-utero survivors, announced at a press conference held in Hiroshima’s Naka Ward that the group had completed and published a collection of memoirs titled Umareta tokikara hibakusha—Tainai hibakusha no omoi, Jisedai ni takusumono (A-bomb survivors from birth—the desire of prenatally exposed survivors and what we want to leave to the next generations).

This second memoir collection follows publication of the first such collection in 2015, a year after the founding of the association, which recorded the accounts of 18 association members. The new collection contains memoirs of 42 members from 15 prefectures across Japan. It also explains the lives of five of the association members, written by family members or supporters, who were born with A-bomb microcephaly due to in-utero exposure to A-bomb radiation. Illustrations in the book, including on the cover, were drawn by Hiroe Kawashimo, 74, a resident of Higashi Ward and an A-bomb survivor with microcephaly.

Ten of the members who provided their accounts for the publication spoke at the press conference. The mother of one of the association members, Kazunori Nakaoka, 74, a resident of Akitakata City in Hiroshima Prefecture, was exposed to the bomb’s residual radiation while caring for survivors of the atomic bombing. Mr. Nakaoka said, “For fear of discrimination, I hid my status as an in-utero exposed survivor until I was in my 60s.” He has suffered from multiple myeloma and wanted others to know his pain by having them read his account. “Atomic bombs are extremely inhumane weapons that have the potential to affect even unborn children,” he stressed.

Shoji Izumoto, 74, Aki Ward, was born to a mother who was a teacher at Hakushima National School (now Hakushima Elementary School). He wrote about his mother’s experience for the first time, encouraged by other in-utero survivors who have shared their accounts. His mother experienced the atomic bombing in Osuga-cho (now part of Minami Ward) and narrowly escaped death simply by chance. “How cruel the atomic bombing was,” he said in a halting tone.

According to Japan’s Ministry of Health, Labour and Welfare, there were 6,879 in-utero survivors with Atomic Bomb Survivor’s Certificates as of the end of March earlier this year. Kazuhiko Futagawa, 74, a resident of Higashi Ward and head of the association, said, “We’ve been told that we are the youngest A-bomb survivors. We hope readers can share in our feelings and pass our experiences down to the generations that don’t know about the atomic bombing.”

The association printed 1,000 copies of the A5-sized, 243-page memoir collection. The group plans to donate copies to libraries both inside and outside Hiroshima Prefecture. For further information, call Mr. Mimura of the association’s secretariat, at 090-7375-1211.