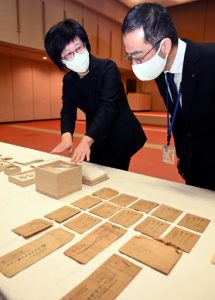 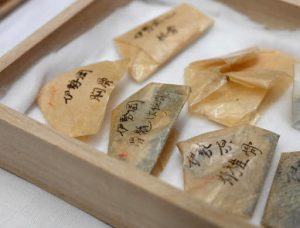 
City to look for families of identified victims
The Institute of Physical and Chemical Research (Riken, headquartered in Wako, Saitama Prefecture) presented the remains of A-bomb victims to the Hiroshima City government on November 12. The remains were found among a variety of materials left by Dr. Yoshio Nishina (1890–1951, originally from the town of Satosho-cho, Okayama Prefecture), who worked at Riken and entered Hiroshima shortly after the atomic bombing by the U.S. military to survey the situation in that city. The city government will place the remains in the Atomic Bomb Memorial Mound, located in central Hiroshima, and seek out the bereaved families of those whose names have been identified.

The remains comprise seven bone fragments and 21 packets of bone powder, some of which were enfolded in medicinal wrapping paper. The materials, including remains in envelopes as well as related notes, were shown to the media on the same day. The remains were found in January last year, when staff members were sorting materials before an aging former Riken building in Tokyo was to be demolished. The materials were found in desk drawers in what had been Dr. Nishina’s office, which was being maintained as a memorial laboratory in his memory.

Several Riken staff, including Chiharu Shimoyamada, head of the public relations office, visited Hiroshima City Hall and presented the remains to the city’s Atomic Bomb Survivors Relief Department. Ms. Shimoyamada said, “I hope that the remains whose names are known can be returned to bereaved family, and that those whose names are unknown will be kept in the Atomic Bomb Memorial Mound and rest in peace.”

Dr. Nishina was an atomic physicist, and his laboratory at Riken was engaged in the research and development of atomic bombs at the request of the Japanese Imperial Army. After the U.S. atomic bombing, Dr. Nishina joined an investigation team dispatched by the Imperial Army headquarters and entered Hiroshima on August 8, two days after the bombing of the city. Other researchers at Riken joined investigation teams dispatched to Hiroshima by the national government’s Department of War. Riken is operating under the assumption that the researchers brought back the remains to Tokyo to measure their radioactivity.

It is not clear how many individuals the remains represent. But the city government examined the envelopes and notes and identified the names of four people. Two are Toshiro Kinouchi and Kikuma Michihara. The other two are identified as having the last names Iseoka and Satoi, but their first names are at this point still unknown.

The city government will place the bones in the Atomic Bomb Memorial Mound, located in Hiroshima Peace Memorial Park in central Hiroshima. The city will discuss how the other materials should be preserved with the Hiroshima Peace Memorial Museum, which is also located in the Peace Memorial Park. Said Nobuto Sugiura, head of the city’s Atomic Bomb Survivors Relief Department, “We will do everything we can to return the remains of the identified victims to family.” For further information, call the department at 082-504-2191.