Striving to fill voids in Hiroshima 75 years after the atomic bombing—Remains of A-bombing victims discovered at Riken, names of four victims identified 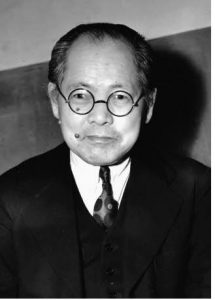 
Hiroshima City to place remains in Atomic Bomb Memorial Mound for repose of their souls
Dr. Yoshio Nishina (1890–1951), of the Institute of Physical and Chemical Research (Riken), entered Hiroshima shortly after the atomic bombing by the U.S. military to survey the situation in that city. Dr. Nishina, originally from the town of Satosho-cho in Okayama Prefecture, had been engaged in the research and development of atomic weapons at the behest of the Imperial Japanese Army. Among the materials left by the late Dr. Nishina were remains of atomic bombing victims believed to have been obtained in Hiroshima by survey teams that included Riken researchers. After the Riken organization offered to hand over the remains to Hiroshima City, the municipal government decided to place them in the Atomic Bomb Memorial Mound, located in Hiroshima Peace Memorial Park in the center of that city, and seek out relatives of the two victims whose first and last names have been identified.

Seven pieces and 21 powdered fragments of bones were discovered in the materials left by Dr. Nishina. The remains were kept in envelopes, along with notes kept separately. Before the aging former Riken building in Tokyo was demolished, the remains had been found in a building housing Dr. Nishina’s memorial laboratory. The Hiroshima City government was informed of the findings in July last year.

According to the city government, it is unclear how many individuals the remains represent. Nevertheless, the notes referred to the names of four people. Two were Toshiro Kinouchi and Kikuma Michihara. The notes also referred to Mr. Michihara’s first name as Kikuo. The other two people’s family names were Iseoka and Satoi, but their first names are apparently unknown.

Dr. Nishina’s laboratory played a central role in pre-war Japan’s atomic physics research and was engaged in the study of uranium enrichment through thermal diffusion at the request of the Imperial Army. The Imperial Army headquarters dispatched a survey team to find out whether the bomb dropped on Hiroshima by the United States on August 6, 1945, was an atomic weapon. As a member of the team, Dr. Nishina entered Hiroshima on August 8. The team concluded that the bomb used on Hiroshima was an atomic weapon on August 10.

Other Riken researchers joined a survey team dispatched by Japan’s Department of War. The team arrived in Hiroshima on August 14 and, among other studies, measured radioactivity in bones from the bodies of A-bomb victims on Ninoshima Island, part of Hiroshima’s Minami Ward, where many injured people were transported from other locations. The researchers joined the department’s other investigation team that had begun its survey work on August 29.

By checking the family names of the four victims against other records of surveys, including the Hiroshima Prefectural History, published in 1972, the city government found three family names on the list of A-bomb disease victims whose bones had undergone radiation measurements by the second team of the war department. Based on such information, the city government assumes that the bones found in the laboratory were obtained through that survey work.

The Atomic Bomb Memorial Mound, located in Peace Memorial Park, is said to hold the remains of about 70,000 victims. The city government continues to send a poster nationwide listing the names of 814 victims whose remains are unclaimed even though their names have been identified. For the two victims whose first and family names are known, the city government hopes relatives will make inquiries. At present, the other two, whose first names have still not been unidentified, are classified as victims of unknown identity.

Several staff members of Riken, now headquartered in the city of Wako, Saitama Prefecture, will visit Hiroshima City Hall to hand over the remains on November 12. An official of the city’s Atomic Bomb Survivors Relief Department said, “We will keep their remains in the memorial mound for the repose of their souls and investigate matters to ensure we can return the remains to family.” For inquiries, call the department at 082-504-2191.