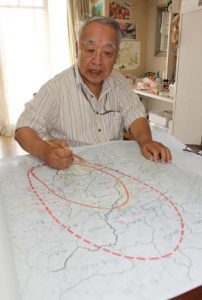 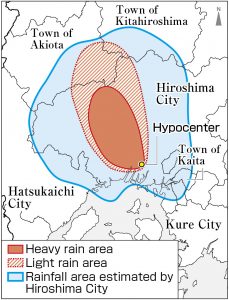 On July 29, the Hiroshima District Court will hand down its ruling on the “black rain” case filed by 84 plaintiffs (nine of whom have already died) living in Hiroshima City and the town of Akiota, Hiroshima Prefecture, against the Hiroshima City and Hiroshima Prefecture governments. The plaintiffs, all between the ages of 70 and 90, claimed that the previous rejection of their applications for Atomic Bomb Survivor’s Certificates was in violation of the law, because they had been exposed to radioactive black rain that fell after the atomic bombing, and took the case to court to have the decision nullified. It will be the first legal decision regarding the appropriateness of the boundaries for the designation “heavy rain area,” within which people are eligible for relief from the national government. With the aging of the plaintiffs, the outcome of the trial is being watched carefully this summer, 75 years after the atomic bombings.

Plaintiffs seek to have area eligible for relief expanded, but government points to lack of scientific evidence

An oval-shaped area stretching northwest from the hypocenter in the city center and measuring about 19 kilometers in length by 11 kilometers in width is designated the “heavy rain area” by the national government. The area’s boundaries demark whether or not government aid is provided. The plaintiffs have long been buffeted by this line.

The plaintiffs were exposed to black rain that fell on August 6, 1945, the day of the atomic bombing of Hiroshima, or shortly thereafter. Later, they developed cancer or cataracts, which are included in 11 diseases recognized by the government as being eligible for receipt of an Atomic Bomb Survivor’s Certificate. However, their applications for the certificate were previously rejected because they were considered to have been located in the “light rain area,” outside the heavy rain area or even further outside that zone. Unconvinced plaintiffs filed successive lawsuits during the period 2015–2018. The first court battle had thus begun.

The Japanese national government drew a line between the heavy rain area and the light rain area based on interviews for a survey conducted by Michitaka Uda and other technicians at the Hiroshima District Meteorological Observatory (now Hiroshima Local Meteorological Office), from August to December of 1945, soon after the atomic bombing. The recommendation compiled by the Conference for Fundamental Problems of Measures for the Victims of the Atomic Bombs (Kihon-kon), an advisory panel to the government that discussed guiding principles of administrative practices involving A-bomb survivors, pointed out that expansion of the area “should be limited to cases in which there is scientific and reasonable evidence.” The government has not changed its stance on this issue, indicating “there is no scientific evidence” to expand the area as the plaintiffs had demand.

Survey is being questioned

Seiji Takato, 79, Saeki Ward, is one of the plaintiffs and also secretary-general of an association to support the lawsuits. He has raised doubts about Mr. Uda’s investigation. “It is obvious that sufficient data were not obtained in the survey, which was conducted of only a few people in the chaotic aftermath of the atomic bombing.” Not much is understood about the health damage caused by internal radiation exposure, or when people are exposed by inhaling air or eating food items contaminated with radiation. He stressed, “It is not right to continue using the 75-year-old survey as the basis for drawing such boundaries.”

On the other hand, the government objects to the plaintiffs’ claim. “Mr. Uda’s investigation was conducted when the experience of the bombing was still fresh in the survey subjects’ minds. It is appropriate to use those data even based on today’s scientific findings.” Indicating that Kihon-kon’s report is proper, the government “does not believe that the rainfall outside the heavy rain area contained enough radioactive fallout to have an effect on the human body, and thus we do not believe that their health problems were caused by black rain.”

On that day, Mr. Takato saw a flash at his home in the village of Kannon-mura (now part of Saeki Ward), followed by black ash that fell from the darkened sky. As an elementary school student, he developed swollen lymph glands and underwent three operations. When he discovered that people who had been exposed to the black rain or ash outside the heavy and light rain areas also suffered disease, he organized a black rain association in Saeki Ward in 2002. As secretary-general of the association, he walked around the area collecting information about black rain and repeatedly petitioned the city and national governments.

However, the government did not agree to expand the area covered by the relief law. Losing his patience, Mr. Takato joined a class-action lawsuit in November 2015. In January this year, he was diagnosed with hypertensive heart disease. He also suffered a stroke. “They have no intention of hearing our voices,” he said indignantly.

What Mr. Takato means by “our voices” is a large-scale survey carried out by Hiroshima City and Hiroshima Prefecture during the period 2008–2010, based on interviews with about 37,000 residents of the prefecture. The survey results showed that the heavy rain area was “roughly six times” larger than the current area designated by the government and includes the areas in which the plaintiffs were exposed to black rain. “The area eligible for provision of relief is too small,” Mr. Takato said, revealing his high expectations for the court decision.

Black rain and the area eligible for provision of relief
The rain containing radioactive materials and soot generated by the fires right after the atomic bombing is called “black rain.” Based on the investigation conducted by the Hiroshima District Meteorological Observatory, the government concluded that the black rain had fallen in an oval-shaped area, about 29 kilometers in length by about 15 kilometers in width. In 1976, the government specified the heavy rain area, that stretching to the northwest of the hypocenter, as the designated area covered by the relief law. Residents who were exposed to black rain in the heavy rain area are entitled to free health examinations. If they are diagnosed as having one or more of the 11 diseases recognized by the national government, such as cancer or cataracts, they are eligible to receive an Atomic Bomb Survivor’s Certificate and thus access to relief measures such as free medical care.