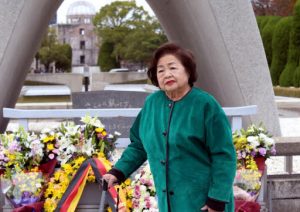 
TPNW illuminates path toward nuclear abolition—Anger about Japan turning its back on treaty
When I was 13 years old, I experienced the atomic bombing at the Second General Military Headquarters (now part of Higashi Ward), located about 1.8 kilometers from the hypocenter. I was trapped in a building that had come down on top of me in the bomb blast, but I managed to crawl out from under it. Fires broke out behind me, and my classmates, still underneath the building, were burned alive. My nephew and elder sisters died in such horrific circumstances. The memories of that day continued to haunt me.

In 1954, Ms. Thurlow traveled to the United States, the nation that dropped the atomic bombs, and then moved to Canada after her marriage. Despite many hardships, she continued to work on antinuclear movements in both countries.
I firmly determined that such a thing should never ever be repeated. My resolve at that time made me denounce nuclear arsenals as inhumane weapons. I sometimes received threats, but it was impossible for me to keep my mouth shut whenever I thought about the unspoken chagrin of the victims.

In recent years, Ms. Thurlow has been collaborating with the International Campaign to Abolish Nuclear Weapons (ICAN), a non-governmental organization (NGO). She also spoke at the Nobel Peace Prize awards ceremony when ICAN was awarded the prize in 2017.
“Crawl toward the light” is a phrase I put into my speech at the Nobel Peace Prize awards ceremony, because it is what an unknown soldier said to me when I was buried under the building at the time of the atomic bombing. This treaty is our “light.” A-bomb survivors are not the only people who have made contributions to realization of the treaty. Pro-treaty nations and many NGOs and other groups worked hand in hand, leading to a successful outcome of the UN conference for negotiation of the TPNW treaty.

The TPNW is one move to set a course toward the abolition of nuclear weapons, since it stigmatizes nuclear weapons as an absolute evil. But the nuclear nations and their allies that rely on nuclear umbrellas oppose the treaty. The U.S. is said to have pressured countries that already joined the TPNW to withdraw from the treaty. Japan and Canada, my two home countries, have repeatedly stated, “It is too early to join” or “The current international situation doesn’t allow us to consider participation in the treaty.” Has there ever been a time when the international situation was stable? We simply cannot wait any longer.

Even after effectuation of the TPNW, the Japanese government continues to turn its back on the treaty.
Japan’s national government has made proclamations that appear to be aligned with A-bomb survivors. For example, it has said, “We’re going to take the lead in the elimination of nuclear weapons.” However, the government has not touched at all on the TPNW in its statements, including the annual resolution on the abolition of nuclear weapons submitted to the UN General Assembly, as well as the prime minister’s comments he made when he attended the Peace Memorial Ceremony in Hiroshima on August 6. It is truly shameful.

That is why Hiroshima’s citizens should become angrier. I hope they become more interested in the treaty. Unless Japanese people can change Japan’s politics, it will be hard for us to have Japan participate in the TPNW. Recently, young people have been lobbying Japan’s Diet members to agree to the treaty. I am delighted and encouraged by their actions.

Because of the COVID-19 pandemic, Ms. Thurlow spent most of the last year at her home in Toronto.
We are now in a tough situation, as the world has changed drastically. Amid such circumstances, we have gained a new way of engaging in the antinuclear movement through this international treaty. I have been participating in online meetings almost every day and am inspired by comments from a diversity of people. A world without the threat of nuclear weapons should be the first step toward realizing a society in which all of us can live together while every individual’s life and human rights are protected. I will move forward with that aim in mind.

Profile
Setsuko Thurlow
Peace activist. Graduated from Hiroshima Jogakuin University and earned a master’s degree in social welfare at Toronto University in Canada. Delivered a speech at the Nobel Peace Prize awards ceremony in 2017, on behalf of the International Campaign to Abolish Nuclear Weapons (ICAN). She is originally from Hiroshima’s Minami Ward.