Striving to fill voids in Hiroshima 75 years after the atomic bombing—RERF, RIRMB to digitize materials related to atomic bombings for access by scientists and public 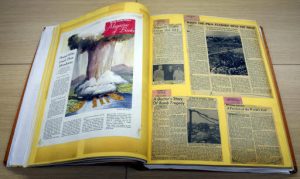 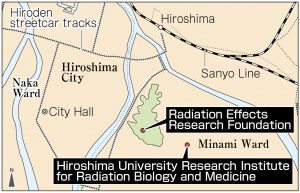 On December 30 it was learned that two Hiroshima-based research institutions specializing in the atomic bombings’ impact on the health of A-bomb survivors would jointly create digital archives through the preservation and organization of historical materials. The Radiation Effects Research Foundation (RERF) and Hiroshima University’s Research Institute for Radiation Biology and Medicine (RIRBM), both located in Hiroshima’s Minami Ward, will jointly create a database of digitized materials related to the destruction caused by the atomic bombing and the research into A-bomb health effects. The materials will be made accessible to the public and easily utilized by researchers. The move to strengthen cooperation between the two institutions comes just as Hiroshima University’s Kasumi campus, where RIRBM is located, was identified as a candidate site for RERF’s relocation.

RERF, jointly managed by the governments of Japan and the United States, was originally established in 1947 by the United States as the Atomic Bomb Casualty Commission (ABCC). The organization has conducted research into cancer and other diseases as late effects of radiation exposure from the atomic bombings. RIRBM was founded in 1961 and has been at the forefront of research into leukemia and other diseases.

One of the main areas of materials to be preserved and made public are historical documents in the possession of RERF. The materials are expected to include records of interviews with A-bomb survivors about the circumstances in which they experienced the atomic bombing, publications from the ABCC era that give insight into the details of the research carried out at that time, and materials that reveal the organization’s interactions with local physicians.

Akiko Kubota, assistant professor at RIRBM’s Division of Radiation Information Registry and an archival specialist, will support the effort along with her colleagues based on their expertise in preservation of documentary records. The group will catalog and take measures to preserve the materials, treating them in accordance with their level of deterioration. They will then be scanned and stored digitally. RIRBM will carry out similar work on its materials, which include records of A-bomb damage surveys conducted in the aftermath of the atomic bombings.

The two organizations are also planning to create and manage archives of image data in their possession. Scientists and members of the public will be able to search and browse the information. Different levels of disclosure will be discussed to protect personal information, with some parts of the materials to remain classified.

Ohtsura Niwa, chairman of RERF, and Satoshi Tashiro, director of RIRBM, agreed on plans to promote the project in April last year, and staff in charge appear to be engaged in the work of developing concrete plans. Mr. Niwa said, “Deterioration of paper documents is a shared challenge of our institutes. With support from the experts at RIRBM, we at RERF hope to work on preserving our materials and sharing the information.”

On December 3, 2020, RERF and Hiroshima University announced that the university’s Kasumi campus had been added to the list of candidate sites for the relocation of RERF, currently located in Hiroshima’s Hijiyama Park. Hiroshima City’s General Health Center, in the city’s Naka Ward, is also a relocation candidate site. According to RERF, its Board of Councilors will meet and make a selection between the two sites at its next meeting in June 2021.